While Microsoft is continuing efforts to kill Adobe Flash, this company is also trying to put Internet Explorer out of its misery. Next month, users who try to go to websites like YouTube, Instagram, Twitter, and more will be automatically redirected to the page opening in Microsoft Edge. This “forced IE-to-Edge” action is part of Microsoft’s broader plan to extinguish Internet Explorer in favor of the newer Microsoft Edge browser. 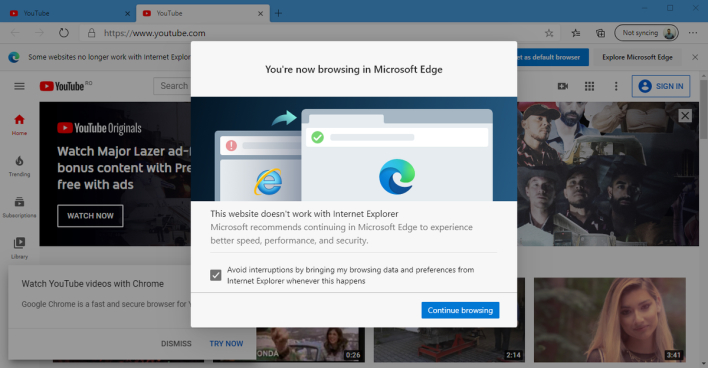 Zdnet’s Catalin Cimpanu reports that over 1,156 websites will no longer work in IE after Microsoft Edge update 87 coming next month. This is due to a newly included DLL called ie_to_edge_bho.dll, which is just a plugin for IE. It will be loaded each time Internet Explorer is loaded and will check URLs against the list to see if they are blacklisted. If it finds they are blacklisted, the site will get kicked over to Microsoft Edge and let the user know that IE is on the way out. This list of sites is managed by Microsoft Engineers and hides within the Microsoft Edge folder if you want to look after the update. The specific paths are as follows:
This way of forcing people over to Edge is a bit invasive and could be an unwelcome addition for some. Thus, Microsoft will be providing policies to disable or manage the feature for enterprise customers. Disabling the feature, though, may not be the best idea, as IE is still on the way out. Users need to start getting used to a new browser early, so Microsoft is forcing hands. In any case, let us know what you think of this IE to Edge transition action in the comments below.