We have some disappointing news for those eagerly awaiting the Top Gun-themed expansion pack for Microsoft Flight Simulator. While the expansion pack for the game was initially supposed to launch later this year, that all changed when Paramount decided to delay the release of Top Gun: Maverick until May 27th, 2022.

As a result, the Top Gun expansion is also delayed to sync up with the feature film's release. "As we have previously announced, the Top Gun: Maverick expansion for Microsoft Flight Simulator for Windows 10 PC, Steam, Xbox Series X|S, and Xbox Game Pass will be released alongside the movie," said the Flight Simulator dev team in a blog post. "We look forward to sharing more information in the future."

The free Top Gun expansion was initially announced at E3 2021, and the stunning visuals of the primary game transfer over in spectacular fashion. While the original Top Gun film from 1986 featured Grumman F-14 Tomcats as the primary "vehicular" star, Tom Gun: Maverick will be centered around the Boeing F/A-18E Super Hornet. The aircraft is intricately detailed in the teaser trailer shown above, and it looks as though aircraft carrier takeoffs and landings are modeled as well. However, the thought of attempting to land on a carrier is bringing back bad memories of the original Top Gun game for the Nintendo Entertainment System (NES) to my mind.

There's even a quick shot of the mysterious, advanced "Darkstar" aircraft that will likely serve as a pivotal plot point in the film. 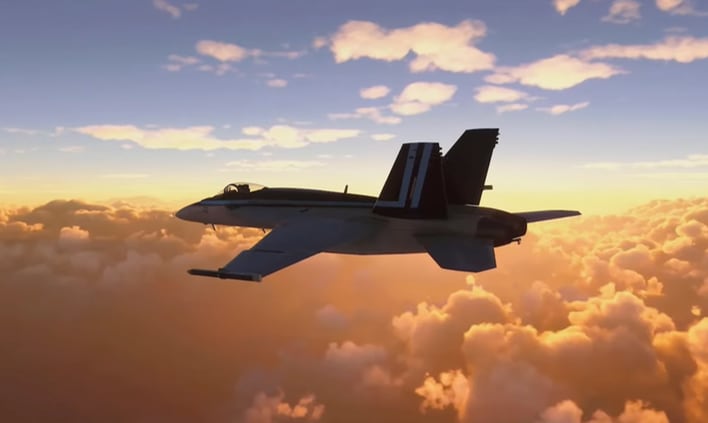 In other Flight Simulator news, World Update VI arrives tomorrow, September 7th. It will bring massive visual updates for Austria, Germany, and Switzerland. World Update VI will be shortly followed up by the release of Junkers JU-52 "Local Legends Plane" on September 9th.

The devs are also celebrating the 1st anniversary of Microsoft Flight Simulator this week on its Twitch stream and will dole out plenty of freebies for hardcore fans.