I imagine airline pilots sometimes encounter strange scenery during their air travels, depending on where they are, the weather conditions, and other factors. But none have flown past a skyscraper so tall and narrow that it defies the laws of physics. That is, unless they have taken to the beautifully rendered virtual skies in Microsoft Flight Simulator.
Microsoft's latest iteration of its long-running flight simulation is absolutely gorgeous. It's highly detailed, and for the most part, accurate as well—it uses actual mapping data from Bing Maps to plot out locations, so you can buzz by the neighborhood you grew up in if nostalgia strikes, or go anywhere in the world, pretty much.
The game is so beautiful and detailed that glitches and bugs tend to be extra hilarious. Like the one spotted by Alexander Muscat on Twitter, who flew over Melbourne and came across the laughably tall skyscraper you see above. It is one of four screenshots he posted to Twitter. Have a look...

In Microsoft Flight Simulator a bizarrely eldritch, impossibly narrow skyscraper pierces the skies of Melbourne's North like a suburban Australian version of Half-Life 2's Citadel, and I am -all for it- pic.twitter.com/6AH4xgIAWg

This is not a goof on Microsoft Flight Simulator's part, at least not directly. The real culprit appears to be Bing Maps, which for some reason has populated the location with an obelisk that would take some serious engineering chops in real life to build, without it toppling over. Could you imagine the elevator ride to the top?
Not every glitch is the fault of Bing Maps, though. Here is a look at what is supposed to be Buckingham Palace...

The 2020 version of Microsoft Flight Simulator "assumes" textures of real life buildings to save memory, and has decided to replace Buckingham Palace with a block of flats! 🤣 pic.twitter.com/Ycaw5qmANK

Microsoft Flight Simulator combines actual Bing Maps data with Azure AI's cloud technology to stream more than 2 petabytes of data, and fill in the gaps with procedural generated graphics. And it its those gaps that it has to fill in that can pave the way for some funky looking recreations of actual places.
Some of the finer details at lower altitudes can end up looking funny as well. Have a look... 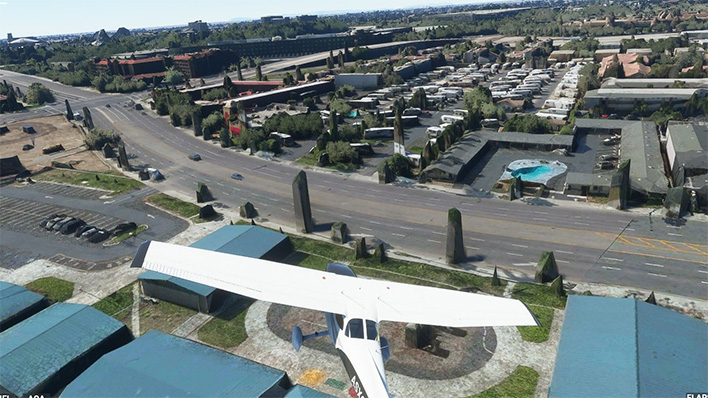 "By far my favorite Microsoft Flight Simulator quirk is that it doesn't know how to handle palm trees, so Southern California is full of these terrifying obelisks jutting forth from the pavement like so many teeth," observed games journalist Hayden Dingman on Twitter.
Arguably none of this takes away from the overall experience, but adds to it in a comical way. And of course there is the actual challenge of flying these aircraft.
if you want to see what quirks you can discover yourself, Microsoft Flight Simulator is available now starting at $59.99.
Thumbnail/Top Image Source: Alexander Muscat (Twitter)