Heads up console gamers, if you own an Xbox Series X or Xbox Series S, are part of the Xbox Insider program, and are subscribed to the alpha ring, there is a new update available that enables playing games in the Dolby Vision HDR format. Microsoft is hoping to solicit feedback and stomp out any bugs before rolling out support broadly later this year.
This is something that was announced last year, before the consoles came out. The plan was always to bring Dolby Vision support to both of Microsoft's newest generation Xbox consoles by the end of this year, though precisely when is still not known. However, the fact that it is actively being tested in the Xbox Insider program suggests it is close. 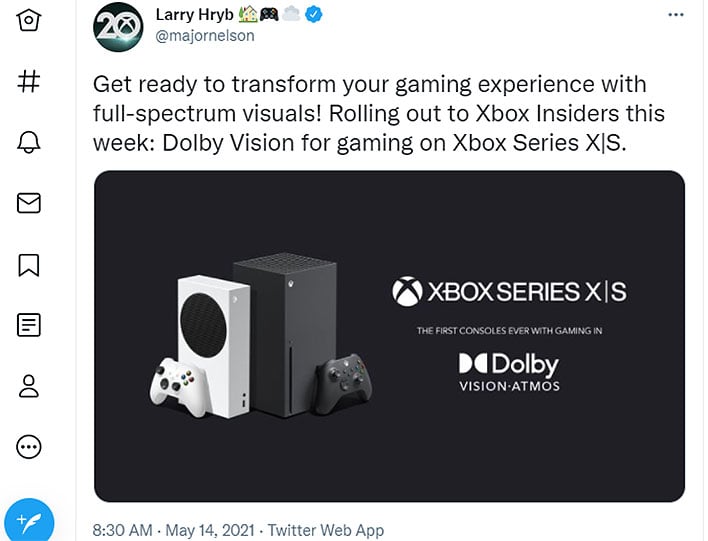 "Get ready to transform your gaming experience with full-spectrum visuals! Rolling out to Xbox Insiders this week: Dolby Vision for gaming on Xbox Series X|S," Microsoft's Larry Hryb (Major Nelson) announced on Twitter.
Dolby Vision is supposed to crank up the vibrancy on supported TVs and monitors, with Microsoft claiming 40 times brighter highlights and black levels that are 10 times darker, along with more contrast and color for greater details and textures. At present, Microsoft's Xbox consoles are the only ones to support Dolby Vision—it's not supported on Sony's PlayStation 5 consoles.
Assuming it works as advertised, Dolby Vision games automatically map to any supported display, which means not having to adjust any picture settings or otherwise having to fiddle with sliders.
It's a neat perk, though its potential benefit largely depends on the display. In the early going, there are reports that Dolby Vision on Xbox Series X/S consoles does not work at 4K at 120Hz, only at 60Hz. This appears to be a limitation even on LG's fancy TVs designed with gamers in mind.
"The Dolby Vision feature is currently in testing and LG is working closely with its partners to support functionality (including 4K @120Hz) on its 2021 OLEDs soon. More details about models will be shared soon," LG said in a statement.
Dolby also released a statement explaining that "Dolby Vision is a framerate agnostic technology" and that it is not supported on some TV models at 120Hz. However, the company said it working with TV makers on firmware updates to enable Dolby Vision at 120Hz, so be on the lookout for that.
You will still need a display that supports Dolby Vision, though, so keep that in mind when shopping for a new TV (if this is a feature that's important to you).