Today's dedicated game consoles share a whole bunch of DNA with their PC brethren, such as Zen 2 CPU cores and RDNA 2 graphics hardware, with support for real-time ray tracing. In addition to sharing hardware characteristics, AMD today announced it is making available its FidelityFX family of effects to the Xbox Series X and Xbox Series S.
AMD's announcement is great for a couple of reasons. One of them is easier cross-platform coding, with FidelityFX now being injected into AMD's Game Developer Kit (GDK) for the Xbox Series X/S. It should also be noted that these are highly optimized, open source tools that developers are free to modify, and now available across PC and console.

Having first launched in 2019 for PC, FidelityFX is now found in over 40 games, including Borderlands 3, Cyberpunk 2077, Detroit: Become Human, Dirt 5, Far Cry 6, Gears 5, Godfall, Horizon Zero Dawn, Microsoft Flight Simulator, Resident Evil 2, Monster Hunter World: Iceborne, Serious Sam 4, Star Wars Jedi: Fallen Order, and World War Z, to name a handful.
AMD says this type of cross-platform support was always part of its vision, and now it's come to fruition. In addition to making things easier for developers, this opens up certain graphics effects to console gamers that were previously only on PC.
"For gamers, AMD FidelityFX coming to Xbox Series X/S means that future Xbox games will be able to benefit from all the platform-specific optimizations and incredible visuals that FidelityFX already helps deliver on PC games," AMD says.
So, what can console gamers expect? FidelityFX comprises a bunch of tools, not all of which have been utilized by developers up to this point. Looking over AMD's GPUOpen page, it looks like developers will have access to at least three of the tools out of the gate. 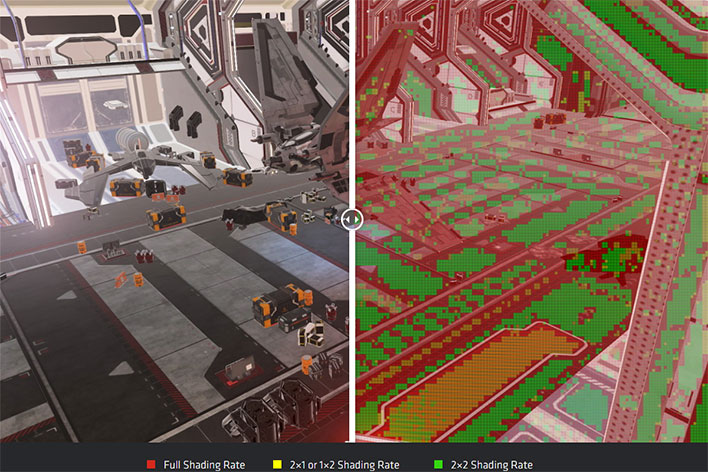 One of them is Variable Shading. This analyzes luminance and motion of frames to optimize rendering performance for higher framerates, without negatively affecting the image quality. In essence, it intelligently reduces visual fidelity in parts of a scene where it won't really be noticed, to lessen the workload on the GPU.
The other two FidelityFX tools headed to the latest Xbox consoles are Contrast Adaptive Sharpening (CAS) and Denoiser. CAS adjusts the amount of sharpening per pixel to target an even level of sharpness across an image, which is supposed to result in higher overall natural sharpness with fewer artifacts. The Denoiser tool, meanwhile, removes artifacts from ray-traced reflections and shadows.
Given that the PlayStation 5 is based on the same GPU architecture as the Xbox Series X/S, it seems AMD should be able to make FidelityFX available there as well. Nothing of the sort has been announced yet, so at least for now, these neat effects are limited to PC and Xbox gamers.