The popular SwiftKey soft keyboard hasn’t been updated for iOS users for more than a year. Now we have learned that there’s an unpleasant reason behind the obvious neglect; Microsoft are going to delist the app from the Apple App Store. SwiftKey iOS will be axed from the store on October 5, but existing users will be able to continue prodding and swiping on it, unsupported, until they refresh their device or get a new one. No reasoning was provided for the withdrawal of this app from the iOS ecosystem.

SwiftKey was originally a hugely popular app for Android devices and still has plenty of users who would balk at its disappearance. In 2012-13 it was the best-selling paid app on Android—quite an achievement. It gained traction with the public for its intuitive swipe-style input, good AI-powered predictive language algorithms, and customizable look and feel. 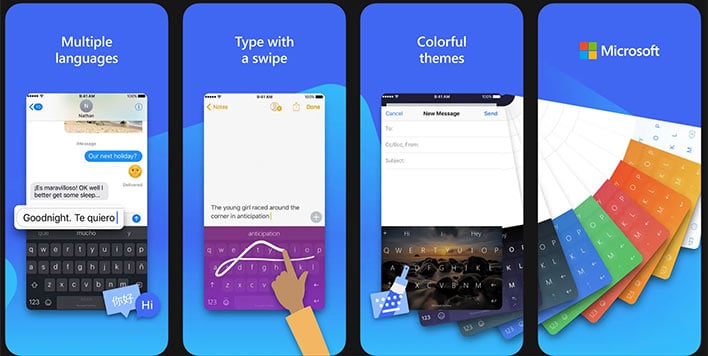 When Apple opened iOS up to third-party keyboards in 2014 (with iOS 8) I remember I quickly installed SwiftKey on my iPad to benefit from the same predictive library that had been built up on my Android smartphone, and bring a slick swiping text input method to iOS. However, Apple never allowed proper full-integration of third-party keyboards, and thus SwiftKey iOS felt restricted compared to the Android version, with users thrown back to the minimal Apple keyboard when entering security sensitive and some other OS dialogs.

The shallower integration of SwiftKey with iOS might be one of the telltale signs of why Microsoft, who bought out SwiftKey in 2016, decided to withdraw this app from iOS devices. Windows reporting stalwart Mary Jo Foley couldn’t wheedle any reasons behind the move from a Microsoft spokesperson. Nevertheless, the senior ZDNet editor has suspicions about Apple’s policies that safeguard, and limit rival firms’ potential to monetize, its walled garden. SwiftKey relies on collecting a fair amount of user data to feed its predictive engine. It is not farfetched to assume this practice has met significant resistance from Apple's increasingly privacy-focused stance.

Microsoft has no plans to withdraw its SwiftKey keyboard app from Android app stores, and it continues to use the same swiping and predictive technologies in its soft keyboard for Windows users.