Any gamers who purchased a new console in recent years knows that they often come with bundled games that require you to type in lengthy codes to redeem. Not only do those codes take a long time to type in using an on-screen keyboard, but it's also frustratingly easy to mistype them and have to start all over. Microsoft is moving to make entering long redemption codes a thing of the past with a new program called Digital Direct.

Digital Direct embeds any games, DLC, and trial subscriptions directly on the console itself. This change was made quietly, and anyone who's purchased a console recently may have games or other content they've missed. Microsoft says that during the setup process for the new console, any content or service offers attached to it will appear for players to claim. 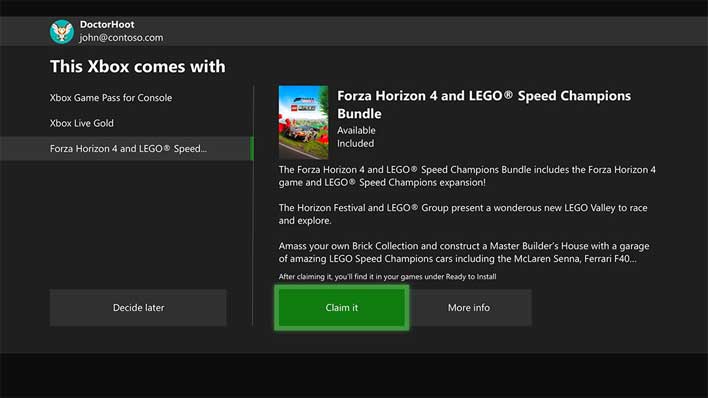 Users will need to click "Claim it" to redeem each of the available items. Once the items are redeemed, they're placed in the digital library under My Games & Apps. Anything redeemed using the new program is attached to the first account that does so. That means if you give away or sell your console down the road, any unclaimed content left on it can be claimed by the new owner. At the same time, any content claimed by another user signed in with another account is unredeemable for anyone else.

Any items not redeemed during setup can be redeemed later by navigating to the Xbox account and opening a menu option labeled "Included with this Xbox." The same menu option is located under the "Full Library" tab inside the console. Microsoft's change will also help keep codes off secondary marketplaces where they can be used fraudulently. Overall, this new program sounds very good as it means never having to type in another long code during setup to claim items bundled with the console.

In other Xbox news, gamers looking for a deal can still take advantage of a three-month Xbox Game Pass Ultimate subscription for $25 on Amazon. While the deal lasts, it offers $20 off the normal three-month price of $45.