If 2020 can be notable for any trends in the tech sector, it's these two: working from home and shunning Intel's x86 processors. Apple famously and most recently gave Intel the boot in favor of its own M1 system-on-a-chip (SoC). However, Apple didn't start this trend. Windows on Arm got a big boost very late in 2019 and into early 2020 when Microsoft released the Surface Pro X. Now Redmond is looking at Arm in a different space: the datacenter.

According to reports from Bloomberg, Microsoft has been working on its own brand of SoC for servers that it provides as part of its cloud services, including Azure. Arm SoCs with a lot of cores and plenty of PCI Express connectivity can service many concurrent clients at once. Microsoft has begun recruiting chip designers over the last year, reportedly poaching talent from Intel and Qualcomm, among others. Building its own processors allows Microsoft to commit on-chip resources to what's important and cut features that it doesn't need while also gaining some independence from Intel's pricey Xeon server CPUs.

While the reports focus on server SoCs, at least one source has said that a follow-up Surface SoC may also be in the works. That would surprise exactly nobody, since Microsoft has already had a hand in Arm PC design. The company partnered with Qualcomm to produce the SQ1 in the Surface Pro X late last year. Back in October, the SQ2 version of the Surface Pro X debuted. Unlike the second-generation Snapdragon 8cx that it's based on, the SQ2 stuck with 4G LTE modems for now, but we expect yet another follow-up with 5G modems will come eventually. 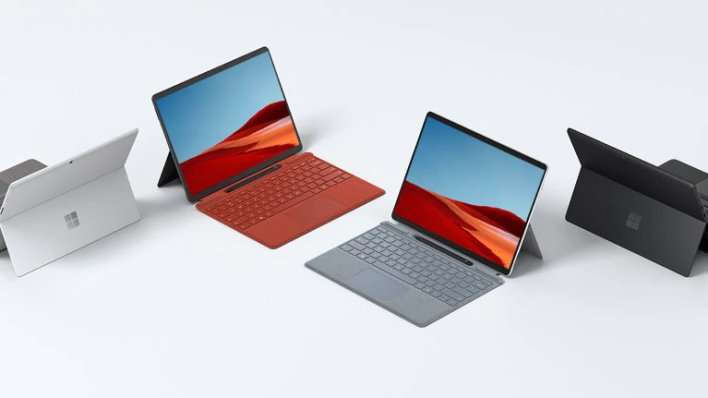 So far, Microsoft and Arm have both declined to comment on the rumors directly. However, Microsoft spokesperson Frank Shaw didn't exactly rule out the company's rumored server CPU plans, either. In a statement to Bloomberg, Shaw said,

Because silicon is a foundational building block for technology, we’re continuing to invest in our own capabilities in areas like design, manufacturing and tools, while also fostering and strengthening partnerships with a wide range of chip providers.

Update, 12/21/20: As a follow-up to this article, an Intel spokesperson reached out to us in the meantime with the following commentary on these rumors:

"The incredible demand for computing fueled by new workloads like AI is driving more silicon experimentation in the cloud. Building on decades of x86 ecosystem innovation, we are committed to providing customers the world’s best CPUs and new products from GPUs to AI chips. In this expanding market, we expect to gain share in many areas like AI training, 5G networks, graphics and autonomous driving.”

While Microsoft's statement doesn't confirm its intentions to go its own way on cloud server CPUs, it seems that diversifying its cloud architecture is very much on the table. Microsoft has already done most of the software work, since Windows 10 already runs on the Surface Pro X, Samsung Galaxy Book S, and LG Flex 5G. That should serve as a solid foundation for porting Windows Server to Arm. Multiple server-focused distributions of Linux like Ubuntu 20.04 Server already run on Arm devices, too. If Arm servers in the cloud sounds familiar, Amazon's Graviton2, which is based on Arm's Neoverse N1 architecture, does something very similar. Arm's Zeus and Poseidon are the follow-ups to the Neoverse N1 (formerly codenamed Ares), so that might be the direction that Microsoft is heading.