There has been a lot of recent talk about graphics cards and CPUs at Computex 2021, but Micron is making a splash of its own with some storage and memory announcements. They include the industry's first PCI Express 4.0 SSD to leverage 176-layer NAND flash chips, and the commencement of volume shipments of 1-alpha LPDDR4x and DDR4 memory products.
Micron views these as important developments towards extending the reach of artificial intelligence and 5G technologies to the masses, with a range of applications.

"As artificial intelligence and 5G reach mainstream deployment, they are creating dramatic new potential for data in the post-pandemic world," Micron president and CEO Sanjay Mehrotra said in a statement. "This transformation presents an opportunity for accelerating innovation to address customer needs. Today we are debuting new memory and storage solutions that accelerate innovation, from powerful data center servers and faster client devices to intelligent vehicles at the edge."
Regarding the newfangled SSDs, Micron is offering two main drive families. One is the 2450 SSD, which is intended for lower cost mobile PCs. It is available in a variety of form factors for OEMs to shove inside thin and light machines, including 22mm x 30mm, 22mm x 42mm, and 22mm x 80mm. All of them are M.2 form factor models.
Capacity options include 256GB, 512GB, and 1TB models. Speeds are decent too, though more in line with a high performance PCIe 3.0 model, despite the support for PCIe 4.0. Here's how it shakes out...
Respective random read and write performance check in at 450,000 and 500,000 IOPS for the 1TB model, 380,000 and 500,000 IOPS for the 512GB capacity drive, and 190,000 and 400,000 IOPS for the 256GB variant.

Micron's 3400 SSD series also features 176-layer NAND while offering up to the twice the capacity and performance of the 2450 SSD line. It's available in 512GB, 1TB, and 2TB capacities, all in a full-length M.2 form factor, with speeds of up to 6,600MB/s. Here's a look...
Respective random read and write performance land at 720,000 and 700,000 IOPS for the 2TB drive, 630,000 and 700,000 for the 1TB model, and 360,000 and 700,000 for the 512GB SSD.
These are more in line with some of the fastest PCIe 4.0 SSDs on the market, like Samsung's 980 Pro, though newer models really put the pedal to the metal. As in, some competing drives push read and write speeds in the neighborhood of 7,000MB/s as drive makers begin to saturate the PCIe 4.0 x4 bus (8,000MB/s is the theoretical top limit).
The overall appeal of these new drives will largely depend on pricing, and of course how real world performance stacks up with Micron's speed ratings. Those are the things the average consumer is most interested in, regardless of the underlying technology. And to that end, Micron has not yet announced pricing or availability. 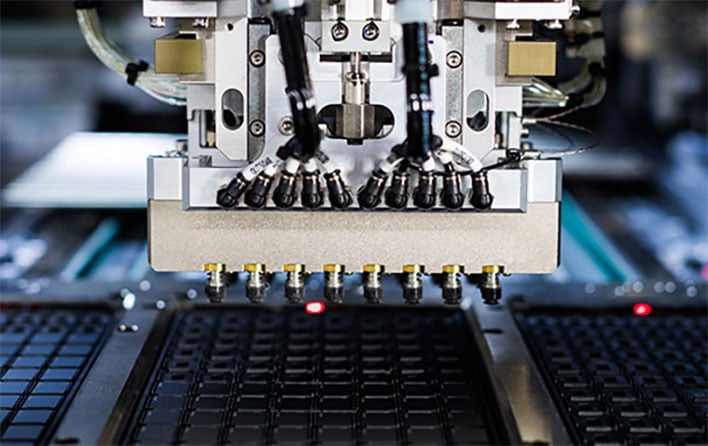 In addition to new SSDs, Micron said it is now shipping LPDDR4x in volume on its 1-alpha node, after introducing its initial 1-alpha DRAM products in January of this year. Micron also completed validation of its 1-alpha DDR4 memory for data center platforms, including AMD's third-generation EPYC processors, which has entered the mass production phase.
"The swift market delivery of Micron 1-alpha based memory provides advanced technology to power innovation from data-centric workloads on server platforms to consumers’ slim notebooks," Micron says. "1-alpha enables power-efficiency improvements for memory, bringing mobility advantages for notebooks by enabling longer battery life both for the work- and study-from-home environments."
Micron put some numbers to those claims, saying its 1-alpha node process provides a 40 percent improvement in memory density, and up to a 20 percent improvement in power savings for mobile applications, compared to its previous generation 1z node LPDDR4x products. The upshot for consumers is that smartphones could potentially see better battery life, though probably not anything significant. Still, every little bit helps.
Look for memory products based on Micron's latest node to find their way into a range of products, including cell phones, servers, client PCs, embedded systems, and even automobiles.