Facebook is betting big on the so-called metaverse, hence why it rebranded the company Meta to reflect where Mark Zuckerberg and the gang believe the internet is headed. Only time will tell how it all plays out. In the early going, though, the metaverse is rapidly expanding, or at least that's the case for Meta's Horizon Worlds platform.
Horizon Worlds is a "social experience where you can create in extraordinary ways." Or put another way, it's a VR playground kind of in the vein of Second Life with a Minecraft-like twist. Horizon Worlds is not the end-game for the metaverse, but a sort of fun introduction. It started off as an invite-only affair before exiting in beta last December.

Now just three months later, the monthly user base has topped 300,000 participants prancing around as avatars, interacting with one another and creating their own custom worlds. Meta spokesperson Joe Osborne confirmed the stat to The Verge after chief product director Chris Cox revealed the number during an internal Meta meeting.
What makes that number so staggering is that it represents a tenfold increase in a short period of time (since launching in December). And those users have already created a combined 10,000 worlds within the VR platform, a stat Meta has shared publicly (on Twitter).
It's not unusual to see an initial spike in usage when something is new, so we'll have to see if the growth continues or plateaus. But it's an impressive start for sure. It's also worth noting that AR/VR device shipments have been steadily climbing over the past few years. 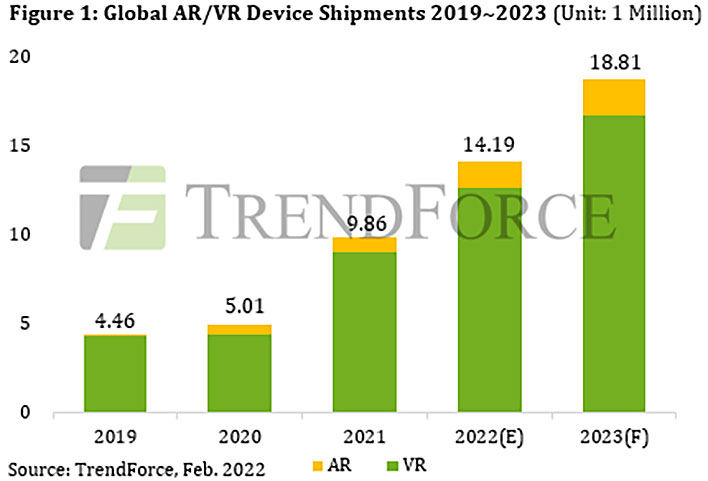 According to TrendForce, there were just over 5 million AR/VR device shipments in 2020, which nearly doubled to 9.86 million 2021. It also recently revised its AR/VR shipment forecast up to 14.19 million units for this year, for an annual growth rate of 43.9 percent.

"Growth momentum will come from increased demand for remote interactivity stemming from the pandemic, as well as Oculus Quest 2’s price reduction strategy," TrendForce says. It also said, "The topic of the Metaverse has driven brands to actively plan for and stimulate product shipment performance."
There would be even more AR/VR devices shipments too, if not for the lingering component shortage. Additionally, the research firm predicts that the success Meta and Microsoft are having in the AR/VR space will "force Apple to release relevant products," which would be a huge deal. If that happens, Apple would likely unleash its own metaverse platform to compete with the Horizon Worlds' rapid growth.

In short, it doesn't look like the metaverse is going anywhere.