Sometimes old video game consoles never truly die, they just transcend into something something nostalgic and better. Thanks to the wonder of FPGAs, we've seen some pretty incredible demos, such as real-time ray tracing on the Super Nintendo. That was an interesting tech demo, but we desired something that both went beyond the original console and also commercially available for just anybody to try out. And now one developer has delivered exactly that: Doom for the Sega Genesis.

Developer uniq.games created Mega Doom, which runs on the FPGA housed inside the Mega Everdrive Pro flash cartridge created by Krikzz. This flash cartridge is the newest in Krikzz's lineup for original Sega Genesis consoles and some clones, like Analogue's Mega Sg, but not software emulation devices like the Sega Genesis Mini. Its $200+ asking price is steep, but this cartridge can play any legally-obtained ROMs you might have, as well as images of Sega CD games without Sega's other hardware add-on for the Genesis.

Running Doom on an FPGA allows for some pretty great enhancements, like running WAD archive files from any version of Doom, including Doom, Ultimate Doom, and Doom 2. Full music soundtracks are supported, although the game requires those to be included in WAV format. We took the shareware version, distributed with Mega Doom, for a spin on a real Sega Genesis with our own Mega Everdrive Pro. Check out the video embedded below.


Mega Doom is based on the Linux port of the Doom engine, and as you might expect it doesn't really make much use of the Sega Genesis hardware. The game makes heavy use of dithering, so we chose to play with composite video into our upscaler and capture 480p with our capture device. Composite video on the Genesis isn't the highest quality around, which results in pixels being blended, giving the illusion of more than just the 61 on-screen colors the Genesis can output at once. It looks particularly sweet on an old CRT television for which the Genesis was originally created.

There are a few bugs that need to be worked out yet. For example, switching weapons with the Z button on the six-button Genesis controller moves down the list of weapons, but it doesn't cycle back around, so once we got to the fist weapon we were stuck with melee until picking up another weapon and the game would automatically switch back. Otherwise, the game runs at a pretty smooth, if unsteady, frame rate and doesn't seem to lag our input. Doom on the Genesis is quite a technical feat. 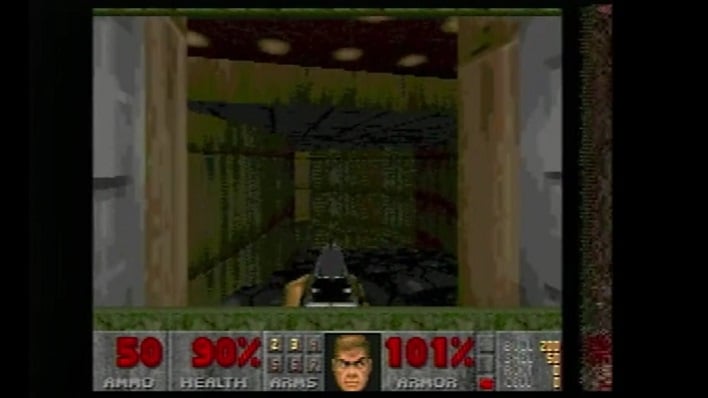 Mega Doom on the Sega Genesis captured during our gameplay test

Back in the day, id Software created a port of Doom for Sega's ill-fated 32X add-on. The 32X had a pair of Hitachi SH2 processors and a bit of extra RAM, and could paint pixels onto images generated by the host Genesis console. Unfortunately, in order to hit the launch window in November of 1994, iD had to turbo through the development process and skipped background music and entire levels. ROM hackers have righted that wrong, but the 32X was a commercial flop and is kind of pricey these days. Mega Doom removes the 32X requirement, but the flash cart is required so this won't run on a community project like the MiSTer.

For those who want to try out Mega Doom for yourselves, the shareware WAD file is bundled with the game and an optional WAV soundtrack. Download it directly from uniq.games on Twitter and unzip it to the root of a micro SD card. Pop the micro SD card into the Everdrive and plug the into a Sega Genesis console. To run the game, select the megadoom.bin file from the megadoom folder created when unzipping the archive.