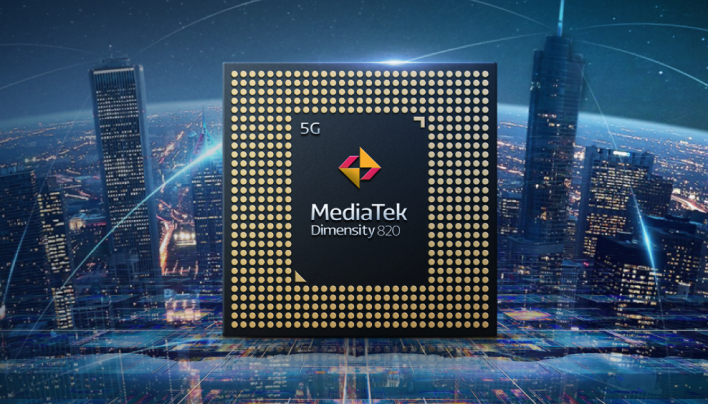 Qualcomm isn't the only game in town when it comes to SoCs for Android smartphones, but its chips are definitely the most visible and most widely used. However, MediaTek has been looking to change that dynamic with the release of SoCs like the Dimensity 1000 and Dimensity 1000+. Now, the company is taking on Qualcomm in the "premium" mid-range market with the new Dimensity 820 SoC.

Like before, there's an Arm Mali G57 handling graphics duties, but it's been beefed up from a 4-core design to 5 cores for improved performance. There's still support for LPDDR4x memory and the MediaTek APU 3.0 engine is included for neural processing, and the SoC is built on TSMC’s 7nm lines. An Imagiq 5.0 ISP is now featured with support for up to a single 80MP camera, or four concurrent cameras.

Other critical enhancements over the Dimensity include the ability to drive FHD+ display at up to 120Hz (up from 90Hz) and MiraVision support, which adds in content upscaling to Full HD resolution and HDR10 remapping (among other things).

What’s perhaps most important in 2020 for new smartphones, however, is the inclusion of a 5G modem. Like the Qualcomm Snapdragon 765 that it will be competing with, the Dimensity 820 features an integrated 5G modem. However, whereas as the Snapdragon X52 modem in the Snapdragon 765 supports both sub-6GHz and mmWave spectrum, the Dimensity 820 only supports the former. However, given the limited availability and range of mmWave, customers aren't really missing out on much with its omission. Enhancements compared to the Dimensity 800 include VoNR technology (similar to VoLTE), carrier aggregation, and support for 5G dual SIMs.

Although MediaTek isn’t giving a specific launch window for the Dimensity 820 at the moment, it says that Xiaomi will be releasing a Redmi 10X smartphone powered by the 5G SoC.