Logitech's ERGO K860 Is An 'Uncompromising' Split-Keyboard For Ergonomic Aficionados 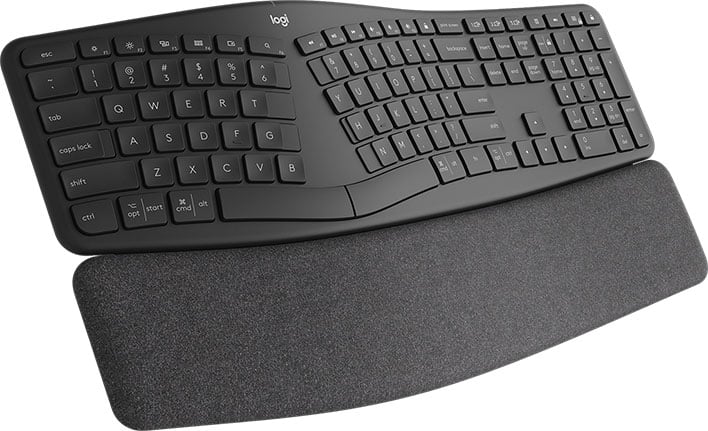 Logitech today announced a new, ergonomically designed keyboard called the Ergo K860. As seen in the image above, it sports a split design to facilitate a more natural typing experience by angling the left and right main typing sections . The idea behind these types of designs is that users do not have to twist their wrists, as is required when typing on a traditional keyboard.
"We know that most people spend between a quarter and a third of their lives at work, so it is important they stay comfortable while they’re at it. We created a science-driven ergonomic keyboard to help office workers improve their posture, increase comfort and lower muscle strain," said Lars Holm Lauridsen, senior global product manager at Logitech. "Ergo K860 is designed, developed and tested with criteria set out by leading ergonomists, resulting in a typing experience that does not compromise your productivity."
In addition to being angled outward, there is a slope on both sides, and a large wrist rest. According to Logitech, the latter offers 54 percent more wrist support and reduces bending by 25 percent. These elements were enough to elicit certification by United States Ergonomics, and entity I was not even aware existed prior to today.

I have not tested the Ergo 860, but there was a time when I used a split keyboard by Belkin as my daily driver, and I loved it. These designs really are more comfortable to type on than a straight plank. Unfortunately, I've yet to see one that goes the distance with mechanical key switches and gaming amenities (for those who are interested).
Logitech is not targeting gamers, though, and instead is pitching this as offering "uncompromised productivity." It's a full size keyboard with a dedicated number pad, and wireless to boot via the included USB dongle or Bluetooth. And according to Logitech, it can stay powered up for two years with the included AAA batteries.
I'll reserve judgement until I've used the Ergo K860, though at a glance, the keys appear to be low profile. There's also no mention of using mechanical key switches. Even outside of gaming, I'd call those compromises.
In any event, the Ergo K860 is available to preorder for $129.99. It will release later this month.