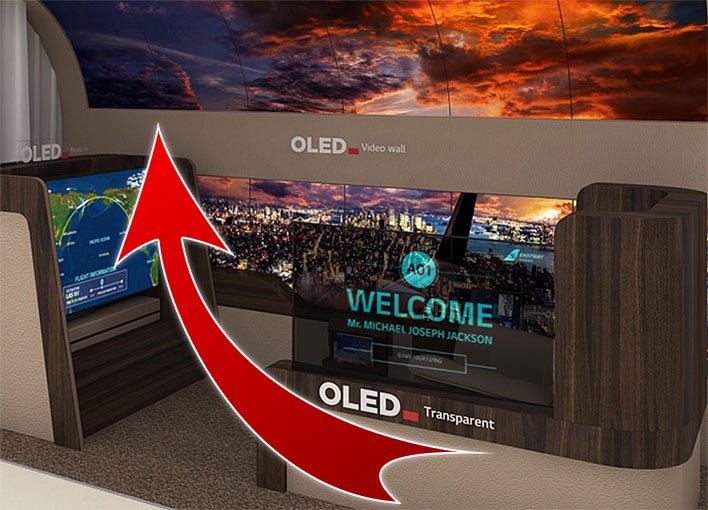 LG Display has been a staunch supporter of OLED (organic light emitting diode) technology, so it comes as no surprise the company will be unveiling new OLED products at this year's Consumer Electronics Show (CES) in Las Vegas. Among them is a rather nifty 65-inch bendable OLED that rolls down from the ceiling.
As far as LG Display is concerned, its newest take on the bendable/rollable display "points to the future of home interior design." You can think of it sort of like a projection screen, in terms of the flexible design. As LG Display explains it, the 65-inch bendable OLED can be rolled up and stored in the ceiling when not in use.
"It is expected to raise the level of smart home interior design by maximizing use of space," LG Display says.
The home is not the only place LG Display is targeting with this design, it also has affluent plane travelers in mind. To that end, LG Display will unveil another 65-inch bendable display for first-class cabins, as shown in the image at the top of this article.

"LG Display will present various OLED display products that will elevate the first-class experience and create a new perception of flight. Its 65-inch Ultra HD (UHD) Bendable OLED display, which can bend at both ends, will enable passengers to enjoy more immersive on-screen images by adjusting the curvature of the display according to their preferences, especially when playing games or watching movies," LG Display explains.
Unfortunately, LG Display did not provide much in the way of specifications for either bendable screen, other than to say they are both OLED (presumably the home model is a 4K resolution display, just like the plane model). There's also no mention of pricing or release dates. One or both of these bendable displays could end up being concept products, but we will have to wait and see.
The bendable screens are part of a much larger OLED roll out, though. LG Display said it plans on unveiling a refreshed lineup for the home with 88-inch, 77-inch, 65-inch, and 55-inch models, plus a 48-inch OLED TV for the first time ever. The addition of a 48-inch model is interesting because bigger screen OLED TVs are generally expensive, compared to LCD models.