As the year comes to a close, companies are starting to look ahead towards the Consumer Electronics Show, which takes place in Las Vegas from Tuesday, January 7 to Friday, January 10. Count LG among the companies getting it ducks in a row. Ahead of the convention, LG is previewing three new monitors it will unveil next month.
All three of its 2020 "Ultra" models have received a CES Innovation Award. Collectively, the upcoming lineup targets both professionals and gamers, though there are key differences between the three displays.

Starting with the largest of the three, the UltraWide 38WN95C is a 37.5-inch monitor with a curved nano IPS panel. It offers a 3840x1600 resolution with a fast 144Hz refresh rate and 1ms response time, which are conducive to gaming. Same goes for the monitor's NVIDIA G-Sync Compatible designation. That means it does not have a dedicated G-Sync module, but has been validated by NVIDIA to support G-Sync, and as such the feature is automatically enabled when paired with a GeForce graphics card.
LG rates the typical brightness at 450 nits. However, this model carries the DisplayHDR 600 badge, and part of the requirement for that designation is being able to hit at least 600 nits. It's not clear what the peak brightness is, but it won't be less than 600 nits.
Connectivity options include a Thunderbolt 3 port, two HDMI inputs, a DisplayPort, and a pair of USB downstream ports.

LG's other nano IPS display is the UltraGear 27GN950. As the model name implies, this is a 27-inch monitor. It offers a native 4K resolution (3840x2160) that is capable of up to 160Hz, which is the overclocked rating (at stock settings, the refresh rate runs at 144Hz.), and 1ms response time.

As with the 37.5-inch panel outlined above, this 27-inch model sports a 450 nits typical brightness rating and is DisplayHDR 600 certified. It also features the G-Sync Compatible badge. It's essentially a smaller version of that other display, though it lacks a Thunderbolt 3 connector. 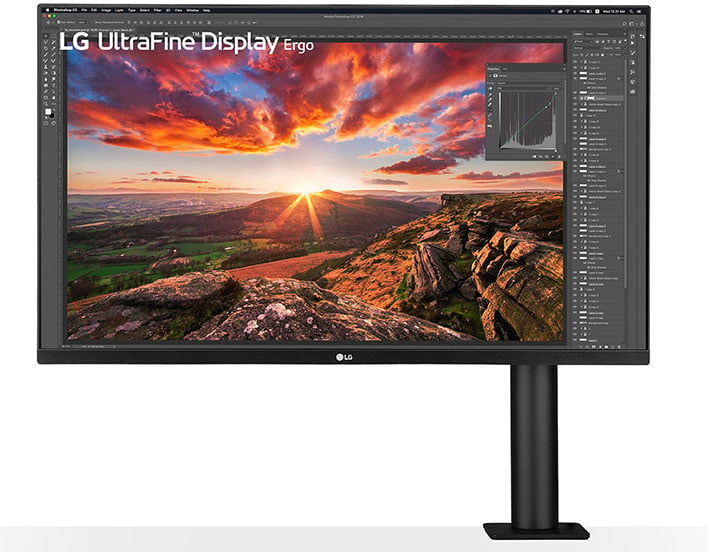 Finally, the UltraFine Ergo 32UN880 is the sole regular IPS model of the bunch. It too offers up a 4K resolution, but with a 60Hz refresh rate and 5ms response time. You could still play games on this one if you wanted to, and to that end, it features AMD FreeSync support. For those who are into esports and fast-action games, however, the higher refresh rates of the other models are better suited for the task (assuming you have a GPU that can keep up).
This is another HDR supported model, albeit with a lower brightness rating at 350 nits. For connectivity, it comes equipped with a USB-C port, two HDMI inputs, a DisplayPort, and two USB ports.
"Our 2020 monitor lineup surpasses expectations with professional-level performance, picture quality and speed," said Jang Ik-hwan, head of LG's IT business division. "The LG Ergo brings new value to users, ensuring comfort and well-being with its uniquely adjustable stand while the 27-inch UltraGear 4K model offers superior picture quality for the ultimate gaming experience and the 38-inch UltraWide builds on LG's legacy of excellence in 21:9 displays."
LG did not say when these monitors will be available or how much they will cost. We image those details will be revealed at CES.