Lenovo is one of the first hardware makers out of the gate to incorporate AMD's brand-spanking-new Threadripper Pro processors into a new desktop line. Unveiled today, the ThinkStation P620 lays claim to being the world's first professional workstation to be powered by a Threadripper Pro processor, with 64 cores and 128 threads of computing muscle at its disposal.
According to Lenovo, not only is the ThinkStation P620 the first workstation to sport a Threadripper Pro chip, it's also the only one. At least for now, anyway—it would be odd if Lenovo scored a long term exclusive deal, but hey, anything is possible we suppose.
"Users can achieve reduced render times, more creative iterations, faster simulation solving, quick assembly rebuilds and smooth interactivity with 3D assets all without having to scale to a dual-core system," Lenovo says.
Details are fairly light, though Lenovo is billing the ThinkStation P620 Pro as a "complete solution" in the workstation realm, with PCIe Gen 4 support, NVIDIA Quadro graphics options, oodles of PCIe bandwidth (128 PCIe lanes ), 8-channel DDR4 memory support, and enterprise-level features and technologies. 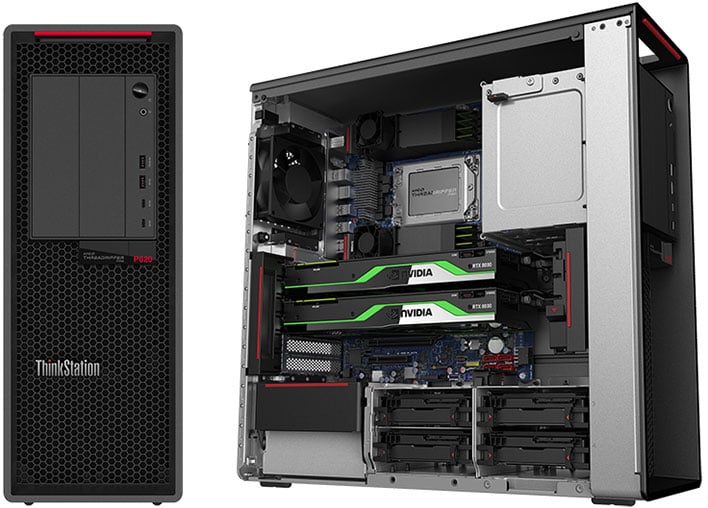 As it pertains to the latter, one of the selling points of the Threadripper Pro series is that it comes with built-in enterprise-grade security and manageability features. This is the same as what's found in AMD's Ryzen Pro models, and similar overall to Intel's vPro platform.
Here's part of what AMD says about its Pro technologies:

This is the first time that AMD has extended its Pro technologies over to its Threadripper lineup. It doesn't come as a surprise, though—recent leaks and rumors tipped AMD's hand. 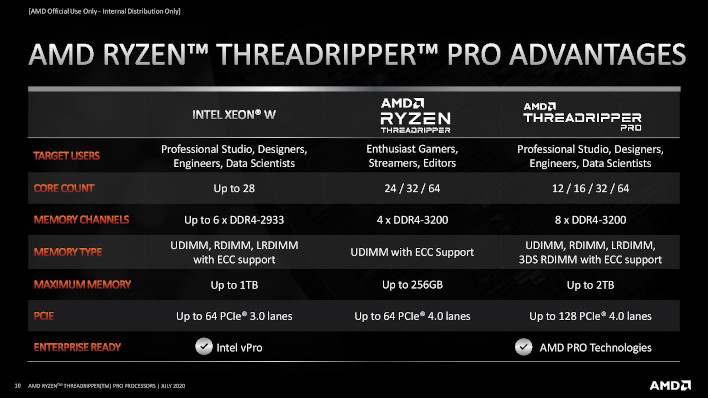 As for the ThinkStation P620, it touts a 64-core/128-thread Threadripper Pro processor clocked at up to 4GHz, paired with up to 64GB of RAM and up to two Quadro RTX 8000 graphics cards. It can accommodate up to six storage drives, including four 3.5-inch HDDs (up to 16TB) and up to two M.2 SSDs (up to 4GB).
Connectivity on the rear consists of four USB 3.2 Gen 2 Type-A ports, two USB 2.0 ports, two PS/2, 10-gigabit Ethernet, and various audio ports. On the front panel, users have access to a pair of USB 3.2 Gen 2 Type-A ports, two USB 3.2 Gen 2 Type-C ports, and a 3.5mm microphone/headphone combo jack.
All of this power and functionality will not come cheap—the ThinkStation P620 will ship in September starting at $4,599.