A series of photos alleging to show a hefty new NVIDIA GeForce RTX 4090 graphics card have been shared on social media. An image showing the headlining quad-slot triple-fan behemoth appeared first, with the card installed in a new-looking Lenovo Legion PC. The poster has followed up with two further images, showing the card with its extremely beefy looking cooler removed.

In the first photo, showing the purported Ada Lovelace architecture flagship, we can see the add-in-card fitted into what looks like a pre-built Lenovo Legion gaming PC. The graphics card appears to be extremely bulky, with a quad-slot design and triple fan-packed cooling shroud. Additionally, it stands significantly taller than the expansion card bracket, and its length was barely accommodated by this PC’s chassis. 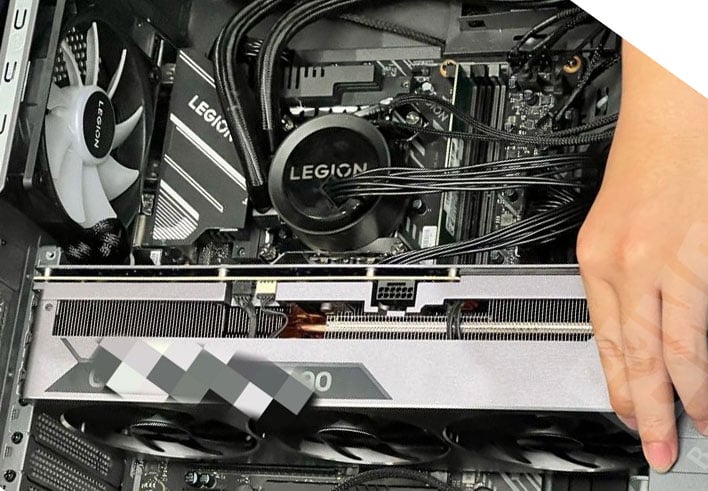 Another thing we can see quite clearly from the system picture is the single 12VHPWR connector. This isn’t plugged in, though the build would benefit from an angled connector or else it might press against the side panel. The power connector will be used to supply the copious wattage that rumors insist will be necessary to feed the GeForce RTX 4090 when it is put to task in gaming or content creation tasks.


Before moving onto the other images, it is natural to wonder why the leaker of this picture felt the need to obscure the logo / writing atop of this graphics card. Perhaps the leaker feels they won’t face any retribution, as this image doesn’t visibly contain any “RTX 4090” text. 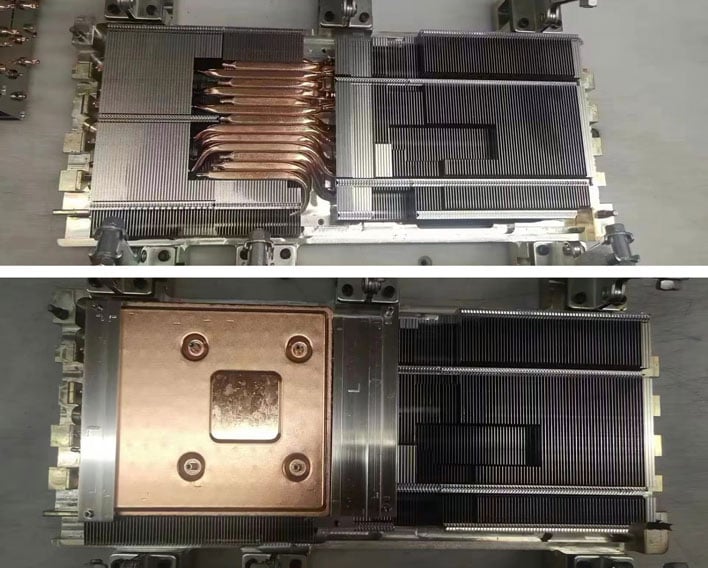 All images via @wxnod on Twitter, who unearthed them on a Chinese tech forum called NGA.178.


The pictures of the RTX 4090 cooling solution attest to the large quantity of waste heat this GPU is going to emit. According to the latest rumors, it will chew through up to 450W when excited. This amount of power is obviously necessary to power its AD102 GPU with 75 billion transistors, running at several GHz, with 16,384 CUDA cores, and 24GB of 21Gbps GDDR6X.

Please note that the triple fans will be pushing air through a mass of aluminum fins threaded by a very dense array of copper heatpipes which make contact with a substantial copper block atop of the GPU.

If the towering presence of this graphics card doesn’t impress you, hopefully its performance will. We will very likely see this GeForce RTX 40 series GPU fully revealed by NVIDIA at the Project Beyond special broadcast, just five days from today.