While you've been stocking up on candy to hand out to trick-or-treat visitors and decking out your home with Halloween decorations, LEGO has been busy assembling an absolutely delightful and spooky-looking gaming PC with tens of thousands of bricks. It's a one-off design so you can't actually buy it for yourself, though with enough time and talent, there's nothing stopping you from recreating it (other than perhaps a lack of a blueprint).
If you do, be sure to show us. In the meantime, feast your eyes on what LEGO and its team of PC modders have put together...

Just in time for Halloween 🎃 This monster, one-off, brick-built gaming PC is giving us the chills. pic.twitter.com/0PhL05ko8g

"Just in time for Halloween. This monster, one-off, brick-built gaming PC is giving us chills," LEGO states in a Twitter post.
The one-minute video clip gives us a tour of the haunted mansion and some of the components inside. At first glance, you wouldn't even know there's a powerful PC sitting inside, let alone one with a close-loop liquid cooling setup. It looks like a creepy, multi-story LEGO house plucked from a horror movie. However, the exterior easily swings open to reveal the ghoulish guts.
It took more than 20,000 LEGO bricks to assemble what is essentially custom PC case mod. LEGO says it's outfitted with an NVIDIA GeForce RTX 3090 graphics card and an Intel Core i9-12900KF processor (Alder Lake), and while both are now last-gen components, they still add up to a potent one-two combo for gaming and content creation.
We also spy a glimpse of two 16GB Corsair Dominator DDR5 memory modules with RGB lighting (for 32GB total RAM), though LEGO doesn't specify data rate. There's no mention of the motherboard's make and model, either, unfortunately. 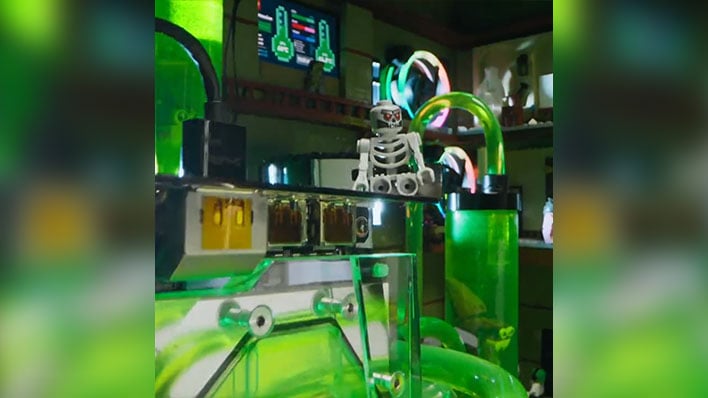 Beyond the core components, the video tour highlights the custom cooling loop with at least two radiators visible and green coolant. Green braided cables permeate the build as well, as do several different horror-themed scenes using various LEGO characters and decorations. In one of those scenes, a Frankenstein monster holding a vial of green liquid stands in front of an LCD screen that displays various system vitals, including CPU and GPU temps. The display also reveals that there's 1TB of total storage split evenly across C: and D: drives.

Oh, and in case there's any doubt, LEGO confirms that "yes, it can run Crysis." Good stuff, but this mod begs for games like Resident Evil 7 and Dead by Daylight to be played on it.