The company formerly known as Facebook could be working on a Meta smartwatch. According to an image that has surfaced online, the device could have Apple rethinking its own smartwatch design to match its phones and revamped Macbook Pro laptops


Mark Zuckerberg announced the official Meta rebranding of the social media giant, Facebook Inc. The announcement came amid a month of severe backlash following the release of internal company documents by a former employee.

The Meta smartwatch image was found by Steve Moser, who designed the app to control Meta's upcoming smart glasses launch in partnership with Ray-Ban. If the image holds true to the watch's design, there will be a notch located center-bottom of the screen for a camera. Yes, a Meta camera on your wrist with a notch.

Along with the notch (aka camera), there appears to be a button on the right side along with another possible button at the top of the screen, One of these buttons could possibly be for taking selfies from your wriste!  Although it might make more sense if taking selfies was done by voice control. "Hey Meta, take pic and send to Instagram!"

It is interesting to know that a smartwatch with a camera was found in an app that controls a pair of glasses that has two cameras housed within its frames already. The Ray-Ban Stories, Meta's smart glasses, are suppose to have two 5MP cameras, one located on each front facing corner of the frames. These cameras are meant to give you new ways to capture photos and up to 30 second videos and then share them all in the metaverse.


The Ray-Ban Stories glasses will also have three microphones built into them to capture all the audio surrounding at any time. A hard-wired LED is suppose to light up to let people know when you are taking photos or video of them. It is not certain if this feature will also include when recording audio. Also, Ray-Ban and Meta may want to get their video editors on getting the company name right when showing what company Mark Zuckerberg owns in the trailer for the product. 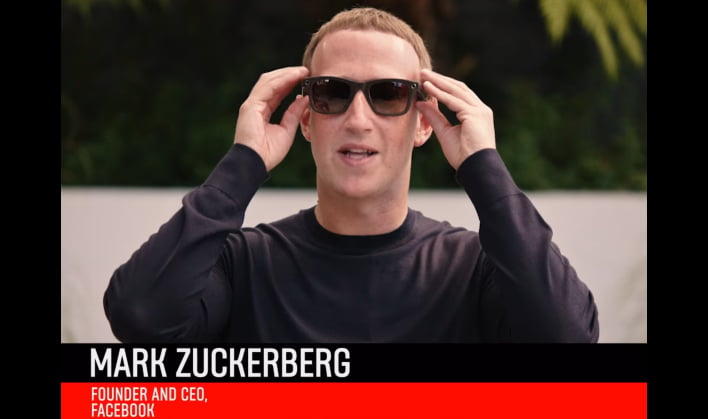 While someone might feel a bit like James Bond when wearing a pair of Ray-Ban Stories glasses along with a Meta smartwatch, the hope will be that they do not have any nefarious plans on how to use them. The glasses are said to have an asking price of $299, while the smartwatch is still a mystery.

Of course all of this is simply conjecture at this point. Meta has not released any news of an upcoming smartwatch, but it would not be surprising if they did. Meta is meant to evolve and grow after all, and what would the future in the metaverse be like without a smartwatch with a selfie camera to go along with and control a pair of sunglasses that can capture the audio and video of every moment of your life (and those around you).