Selecting fast memory is one of the more nuanced aspects of building an AMD Ryzen PC. We feel like the idea is fairly-well disseminated among the DIY community, but for those not familiar, the transfer rate of Ryzen processors' internal fabric is linked to their memory speed. Slow memory means slow fabric, which means reduced performance on most tasks and especially games.


We do not know for sure if this design quirk is carrying over to AMD's next-generation Zen processors, but it seems possible given AMD's enthusiastic emphasis on the memory overclocking performance of its Zen 4 cores. The company bragged that early chips in its labs were hitting "speeds that you maybe thought weren't possible."
We've already seen documentation from AMD that shows the company testing its pre-release processors with DDR5 speeds as high as 6400 MT/s. To put things in perspective for those who are not up on DRR5 yet, that's fully 50% faster than Intel's spec for Alder Lake, which is 4800 MT/s. Specifically, the company tested a 16-core Zen 4 processor with DDR5 memory at 6400 MT/s with a CAS latency of just 32.


That's the exact same result that we have today from Taiwanese overclocker Toppc. Toppc is a well-known name in competitive overclocking circles, particularly in the realm of memory overclocking. He posted up a carefully-cropped image on Bilibili that seems to show the CPU-Z "Memory" tab on a system running DDR5 memory at 6400 MT/s with tight 32-38-38-96 timings. 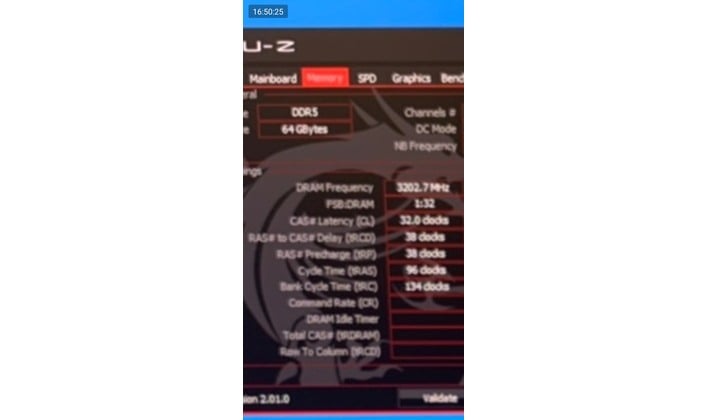 While CAS latency of 32 might seem shockingly high, remember that latency is measured in transfers, not in real time. Doing the math, 32 cycles at 6400/MT comes out to just 10 nanoseconds of first word latency, which puts this performance among the very fastest DDR5 sold today. Most DDR5 memory has significantly higher latency, which is why fast DDR4 memory (which can go as low as 7ns) can be competitive or even superior in workloads that don't benefit from the greatly-increased main memory bandwidth offered by DDR5.


For his part, Toppc does not actually make any claim about the screenshot coming from a Zen 4 machine. However, HXL (@9550pro on Twitter) remarked as much, and then user @GoFlying8 confirmed with Toppc himself that it is indeed an AMD platform, but that he was under NDA and couldn't say more. 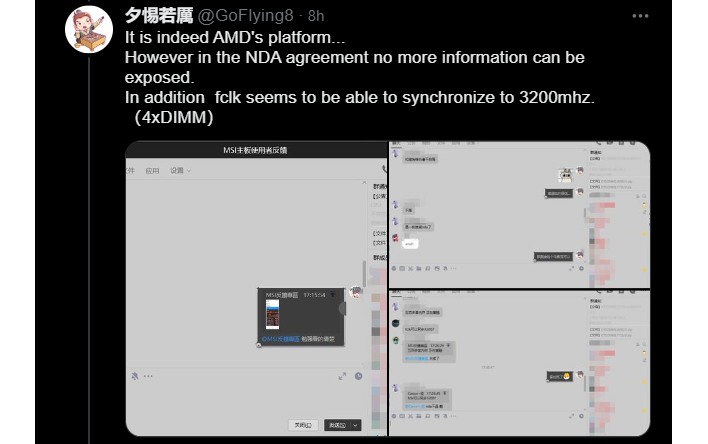 This is good news for the incoming Socket AM5 platform. Due to its memory speed reliance, many early Zen systems struggled to reach their full potential as the platform simply wasn't capable of handling high-speed DDR4. AMD got that fixed up for Zen 2 and especially Zen 3, and it looks like they are keen to avoid a similar foible with Zen 4. We suppose we will find out pretty soon if the rumors about AMD's next launch are true.