AMD announced the Ryzen 6000 Series for laptops at CES 2022, and the presentation primarily focused on the new processors' graphics capabilities. That's no surprise to anyone who knows the score; the Ryzen 5000 Series for laptops was based on more or less the very same Zen 3 CPU cores, so the 6000 series is more of a refresh in that specific regard. AMD did make some refinements to these mobile CPUs in the 6000 series, but they had to do more with power savings and efficiency, versus all out performance.


The replacement of the aged Vega graphics architecture with the modern RDNA2 is certainly cause for celebration, as it brings along improved efficiency as well as advanced video encode and decode features. It's very likely that these "Rembrandt" processors will smash their competition in graphics workloads. It doesn't help against Intel's Alder Lake CPU attack, though; the blue team revealed its latest mobile CPUs at CES, too, and they're already smashing records left and right.


Confirming this point are a couple of Geekbench 5 result leaks for the announced-but-as-yet-unreleased Ryzen 9 6900HX, courtesy of @TUM_APISAK and @Benchleaks on Twitter. Now, to be clear, Geekbench 5 is not necessarily representative of real-world performance on any given application. Still, when comparing within the same ISA (i.e. x86-64), it gives a reasonable point of comparison between two chips. 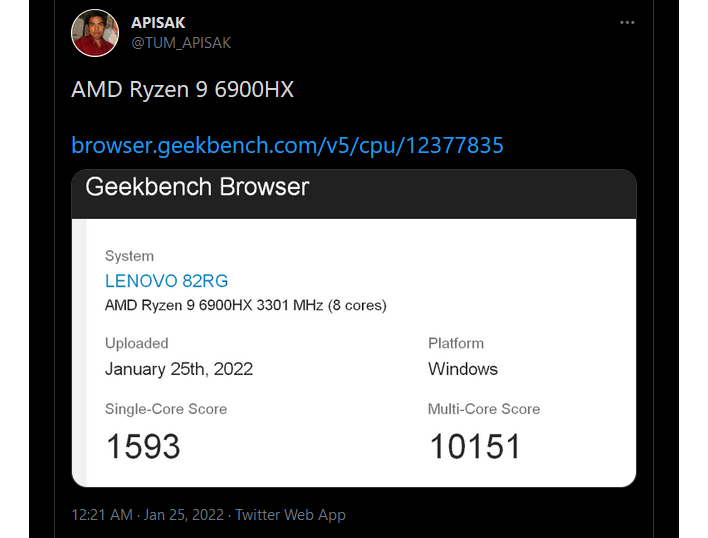 The first result, from APISAK, is a Lenovo "82RG" laptop sporting a Ryzen 9 6900HX CPU. That's a "45W+" SKU meant for gaming laptops and mobile workstations, sporting eight cores, 16 threads, and acccording to AMD, a maximum boost clock of 4.9 GHz. That's borne out by the Geekbench data, too. That result garners a single-threaded score of 1593, and a multi-threaded score of 10151.


Meanwhile, Benchleaks found a second result for the same CPU, also in a Lenovo test platform, that scores a higher 1616 on single-core, but a slightly lower 9939 multi-core result.

Those aren't bad results for a laptop processor by any means. The single-threaded scores are about a hundred points higher than the average score for a previous-generation Ryzen 9 5900HX—not bad for a new chip with the same CPU cores and same TDP—while the multi-threaded scores are about 2000 points higher. That could point to this Lenovo test platform having better cooling than the retail 5900HX laptops being tested on Geekbench, or it could be the result of the aforementioned power-saving and efficiency improvements over last-gen.


Those results don't look bad against Intel's last-gen efforts, either. If we compare the leaked results to typical results for the Core i9-11900H (also an 8-core, 16-thread CPU with a maximum boost of 4.9 GHz and a 45W TDP), they look pretty good. Excluding some unusually-poor outlier results, the average single-core score for an 11900H is 1524, and the average multi-core score is 7873.


The problem comes in that those are last-gen parts. If we compare the 6900HX results against Intel's latest and greatest, the situation isn't as rosy. Looking at the Core i9-12900H—the Ryzen 9 6900HX's direct competitor, at least in terms of branding—we see an average single-core score of 1842 and an average multi-core score of 14088. Both results decimate the new AMD chip, although it's worth noting that the multi-core result isn't exactly "fair" given the Core i9's fourteen physical cores. Then again, it's all about power envelope and cost, and we weren't complaining when AMD released the first 8-core laptop chip a couple years back either.

Of course, this is just one synthetic benchmark, and it's reliant on user-submitted data at that. Plus, it says nothing about integrated GPU performance, power efficiency, battery life, or other concerns, like heat output (and thus fan noise.) Still, it's looking like AMD's Rembrandt APUs are going to have a tough battle versus Intel's new Alder Lake mobile offering. That's probably not the position AMD wants to be in, but it's good news for those of us that think Zen 3 is plenty-fast and are looking to score a deal on a laptop with fast integrated graphics.