Kioxia's Gaming-Changing Ethernet-Connected SSDs: What They Are And What They Can Do

Kioxia has begun shipping a new line of solid state drives for the enterprise market (separate from its recently introduced CD7 line), the EM6 series, though these are unique from past offerings in the segment. These are NVMe-oF (Non-Volatile Memory Express over Fabrics) drives for Ethernet Bunch of Flash (EBOF) systems, which in plain speak means they leverage an Ethernet interface that makes scaling data center storage capacity potentially easier and more cost effective.
The key ingredient here is Marvell's 88SN2400 NVMe-oF SSD converter hardware. What that does is convert an NVMe SSD into a single or dual-ported 25-gigabit (Gb) NVMe-oF SSD, allowing data centers to effectively share storage resources over a network with latencies comparable to direct attached storage (DAS) solutions.
"Due to their ability to scale performance of NVMe SSDs, native NVMe-oF architectures are well-suited for applications such as artificial intelligence (AI)/machine learning (ML), high performance computing (HPC) and storage expansion," Kioxia explains.
"In the case of HPC, leveraging the Lustre file system, which is used to provide high bandwidth and parallel access to compute clusters, is beneficial to NVMe-oF based storage, such as EBOF systems with EM6 SSDs, that enable high availability (HA) configurations," the company adds.
It was around a year ago when Kioxia introduced the world's first Ethernet-connected SSDs, at the time describing the benefits in a relatively easy-to-digest blog post. The company likened it to the costs associated with upgrading smartphone storage. For example, if you bought a phone with a microSD card slot, you can simply slide in a memory card for more storage. But on devices that don't have one, an otherwise $20 storage upgrade is far more expensive, because a person would have to buy a whole new phone. 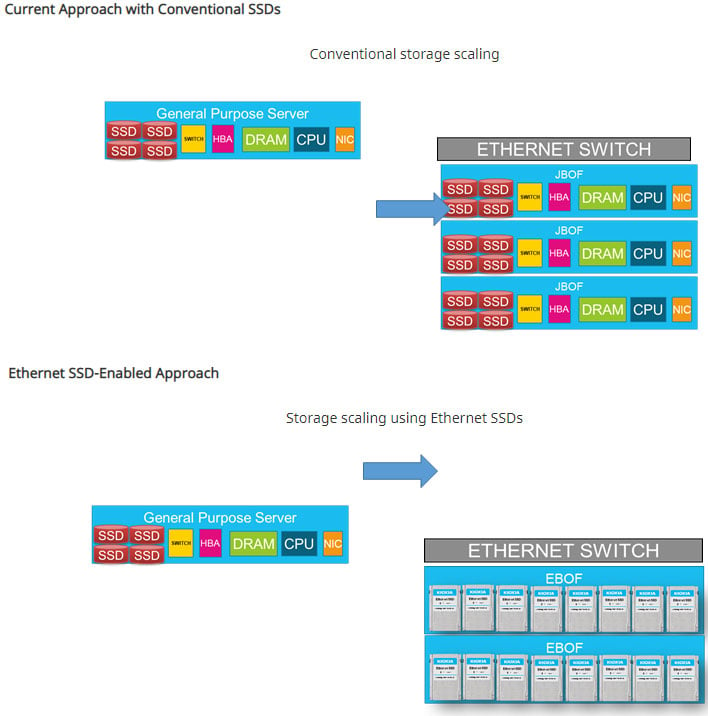 "This is exactly what is happening in the enterprise and data center world. Many of our customers are forced to buy the proverbial ‘new phone’ every time they want to scale their storage infrastructure...We built Ethernet SSDs to solve this exact problem. Our goal is to unleash the full performance of flash storage without the burden of redundant peripheral infrastructure costs," Kioxia said.
According to Kioxia, this brings data centers significantly closer to future-proofing interface transition challenges the flash storage industry faces as it continues to scale storage. And as it applies to the EM6 series, Kioxia says it has undergone NVIDIA GPUDirect Storage (GDS) certification testing, for connecting to A100-based systems for AI and ML applications.
Other key features include...
The EM6 series is available now as part of the ES2000 EBOF platform from Ingrasys, a subsidiary of Foxconn.