This year's Dell Technologies World event is right around the corner and one of the conference's Diamond sponsors, Kioxia, will be in attendance to showcase a handful of "breakthrough flash storage solutions." Among them will be one of the first public demonstrations of a drive based on the EDSFF E3 form factor for data centers.
EDSFF E3.S is poised to replace M.2 and legacy 2.5-inch U.2 form factor drives as data centers implement next-generation storage solutions. The demonstration will entail Kioxia's CD7 series drives, which the company introduced last November as the first EDSFF E3.S models with PCIe 5, running MongoDB on Dell equipment. 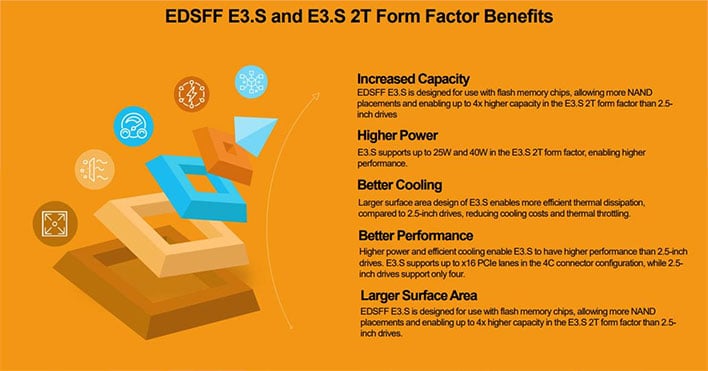 The EDSFF E3.S (and E3.S 2T) form factor offers a host of benefits, as Kioxia had previously outlined. These include better cooling and performance, support for up to 25W in E3.S and 40W in E3.S 2T, and a larger surface area to enable significantly higher capacities.
Kioxia will also demo its FL6 series of enterprise NVMe SCM SSDs in a Dell PowerEdge server running Aerospike.These are dual-port, PCIe 4.0 models that are intended to bridge the gap between DRAM and triple-level cell (TLC) drives. According to Kioxia, they're especially well suited for latency sensitive workloads, such as caching layer, tiering, and write logging.
Other demos on tap include Kioxia's RM6 series of 12Gb/s SAS SSDs running in an Dell PowerEdge R740 server, and the CM6 series (enterprise NVMe SSDs) running VMware vSAN workoads on PowerEdge hardware.
"A culture of innovation is the bedrock upon which a company can claim to offer breakthrough solutions – and both Dell and Kioxia have that in their DNA," commented Neville Ichhaporia, vice president of SSD marketing and product management, Kioxia America, Inc. "We are proud to collaborate closely with Dell to push the limits of what’s possible in our new data-centric world."
You can head over to Kioxia's virtual booth to check it all out from the comfort of your home office. As for the event, Kioxia and Dell will jointly conduct a breakout session on May 3 at 1:30pm and May 4 at 10am.