Kioxia Unveils Blisteringly Fast 6.9GB/sec PCIe 4 U.3 SSDs Up To 30TB For Data Centers And The Enterprise 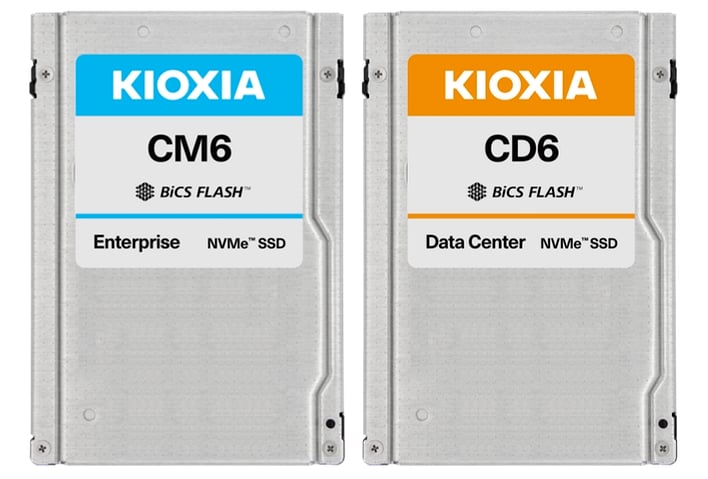 Kioxia America, formerly known as Toshiba Memory America, has unveiled two new lines of solid-state drive (SSDs) that are designed for the enterprise and data center markets. While we've seen some consumer-level SSDs that have been able to achieve breakneck speeds courtesy of the PCIe 4.0 interface, these new Kioxia SSDs are on an elevated plane with respect to performance.

First up is the CM6 Series SSD family, which is available in capacities ranging from 800GB up to a mind-boggling 30.72TB. Equally as impressive as the storage capacity of these SSDs are their performance, which is rated at up to 6.9GB/sec for both sequential reads and writes. Random read/write performance checks in at a cool 1.4 million IOPS. 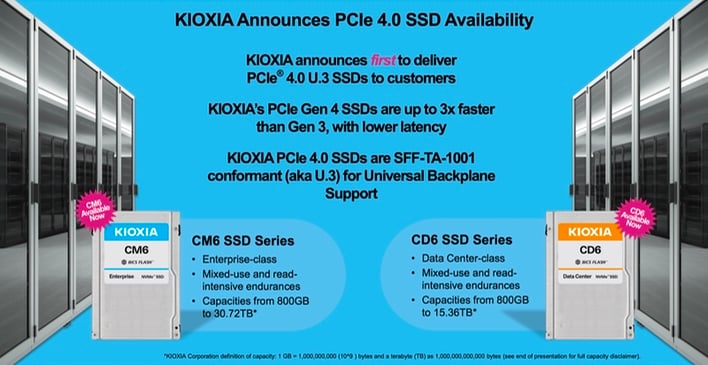 Leveraging the PCIe 4.0 interface, Kioxia says that the CM6 offers a 3x uplift in performance over previous-generation PCIe 3.0 SSDs. Kioxia is primarily aiming these SSDs at a number of market sectors including data analytics, financial trading, and high-performance computing.

Moving on, the company has developed the CD6 Series SSDs for large-scale data center deployments including cloud computing and virtualized environments. As such, performance specs are slightly lower, but still impressive. Sequential reads/writes are rated at 6.2GB/sec, while random reads/writes are rated for 1 million IOPS.

The full specs of both families are detailed here for IT types looking to dig into specifics... 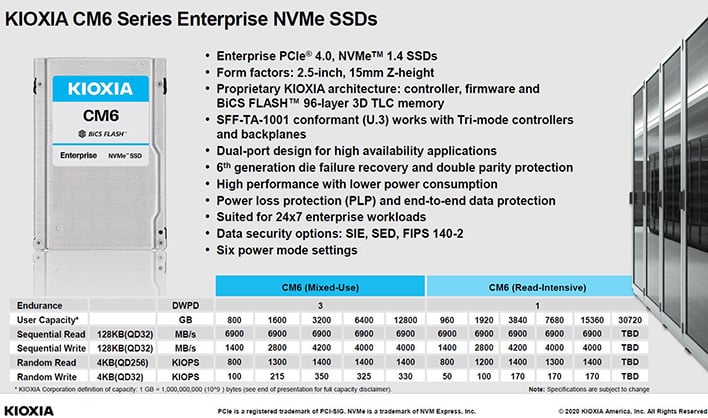 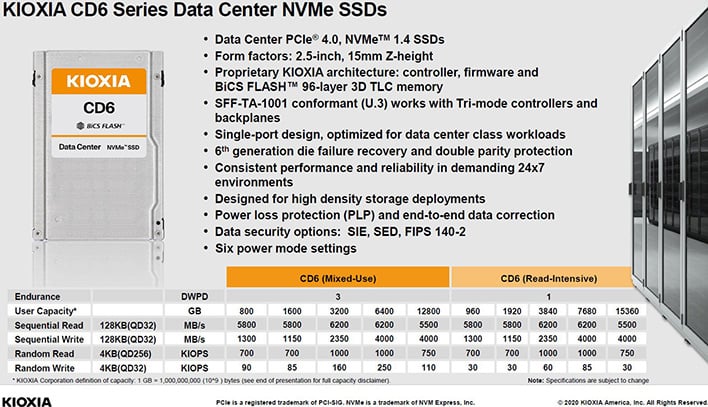 It should be noted that both the CM6 and CD6 are U.3 (Universal Backplane) enabled, while maintaining the same SFF-8639 connector as the U.2 spec. U.3 supports a tri-mode backplane with SAS, SATA, and NVMe in a single controller across, and hot-swapping capability is supported (if enabled in firmware). Both SSD families feature a 2.5-inch form-factor (15mm Z-height) along with proprietary Kioxia controller, firmware, and 96-layer BiCS NAND flash. 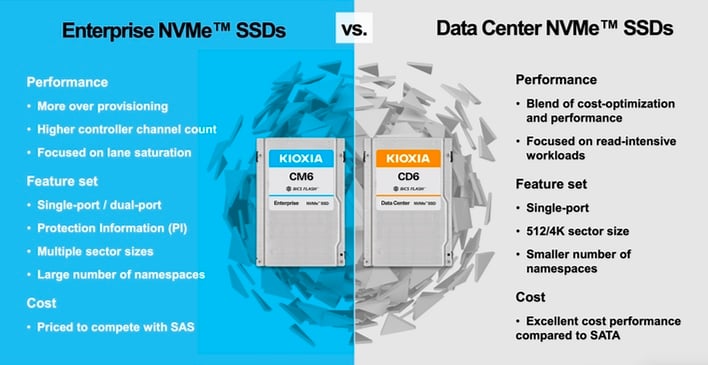 Given the new PCIe 4.0 support, we shouldn't be too surprised to hear AMD boasting about these new Kioxia SSDs which are a perfect fit for its EPYC 7002 platform. “AMD is leading the PCIe 4.0 charge with AMD EPYC, which is poised to bring in a new era of compute, graphics, networking, and storage in the data center,” said Raghu Nambiar, AMD Corporate VP for Datacenter Ecosystems & Application Engineering. “We are pleased to work with KIOXIA and their PCIe 4.0 NVMe SSDs demonstrating industry leading performance and TCO while creating new application value for our customers.”

According to Kioxia, its new CM6 and CD6 SSDs are currently shipping to customers but pricing details are yet to be disclosed.