Synthetic benchmarks get a bad rap. Sure, they're not always representative of real application performance -- that much is inarguable. They're still extremely useful, though. Not only can they help developers pinpoint performance problems for specific troubleshooting, but they also can help users confirm that their computer is operating correctly.


Yep, as you've probably guessed, we're looking at a bundle of synthetic Intel Arc GPU benchmarks. Twitter user and GPU developer 0x22h has gotten his hands on what seems to be an Arc A380 desktop graphics card, possibly the very same Gunnir card we wrote about before, and he's run a few benchmarks on it to observe the bizarre behavior.
Most of the benchmarks he ran are tests he seems to have devised himself, consisting of simple test apps carefully targeting one metric or another. He comes out with raw fillrate of 62 Gigapixels/sec, which is around what we would expect for this part. Another benchmark seems to indicate that the Alchemist parts are using a tile-based architecture, similar to PowerVR and recent NVIDIA parts.


More concerning are the benchmarks that show significantly worse performance than expected. Multi-sampling performance on the Arc A380 is "very poor", with 2x MSAA dropping performance by nearly 40% in another test. Meanwhile, OpenCL performance in AIDA64 is coming up with a result of just 2.5 TFLOPs, or a little more than half of what we would expect from this part.


Well, that last result may be down to a bug in AIDA64. Eagle-eyed Locuza, famous for his annotated die shots, pointed out that AIDA is only counting 512 "cores" for the A380, half of its actual number. It's likely that an update is needed for the long-running system info and benchmark tool to allow it to fully realize performance on Arc Alchemist.


The most brow-furrowing results gathered by 0x22h are the card's performance in 3DMark. Unfortunately, 0x22h didn't share any results from the standard Fire Strike or Time Spy benchmarks, but did run the "Feature Tests" included with the app. The results are mixed. 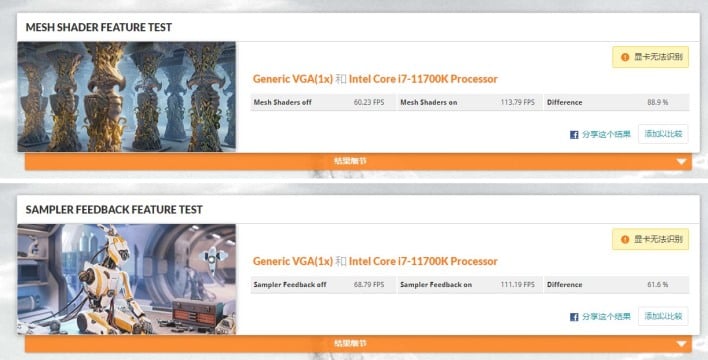 Both the Sampler Feedback and Mesh Shaders tests completed correctly, and while the speedup is lower than what we're used to on GeForce and Radeon GPUs, we also have to remember that this is an extremely small GPU. The fact that the tests both completed correctly and provided significant performance gains show that Intel has been focusing its development efforts on DirectX 12, and that those efforts have borne fruit.

The API overhead test's results are more problematic. The DirectX 12 number came out perfectly fine; 11.5 million draw calls is a good result given the system in question. The DirectX 11 and Vulkan tests are not so great, particularly the DirectX 11 multi-threaded test, which didn't even break a million draw calls per second. This is most likely down to insufficiently-mature drivers, as DirectX 11 is very reliant on the driver for solid performance.

It's important to remember that these synthetic benchmarks could ultimately have little bearing on game performance. It's also arguable that DirectX 11 performance is less important now than it once was, but for our part, let's just say there's a reason AMD is still working to improve its own DirectX 11 and OpenGL drivers. Hopefully Intel can get its GPU software all fixed up sooner than later.