So saying, Intel's planning to become a force to reckon with in the discrete GPU market, and anticipates becoming at least a quarter of the market within a year. Those are big goals, but that's the kind of confidence we've come to expect from Intel over the last couple of years, and if anyone can do it, it's probably Intel. Then again there are probably qualifiers in the mix here as well. Like are we counting discrete laptop GPUs too in that number? Probably.

We're just as curious as the rest of you to see how high Alchemist can stack up compared to its competitors. Based on leaks and rumors, we have a reasonably clear picture of what the top-end Alchemist GPU's capabilities will be. It's supposed to have 512 EUs, giving it 4096 shaders; a reasonable compute array to compete on the high-end, as long as the rest of the product falls into place.


One big question mark concerning DG2-512 (the old codename for the biggest Alchemist chip) has been its clock speed. Folks don't talk about the ol' MHz number much anymore, but it's still one of the important determinants of processor performance. Well, we have at least one data point now, courtesy of the Benchleaks bot on Twitter. 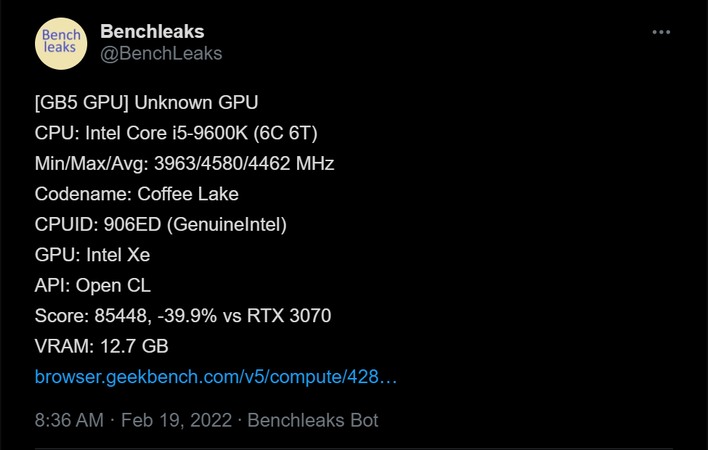 That automated aggregate benchmark database observer spotted this result in the GeekBench OpenCL benchmark repository that purports to be an Intel Xe GPU with 512 compute units and 12.7 GB of video memory. We're not super clear on what's going on with the 12.7 GB of VRAM, but we've actually seen that before. The 512 compute units spec is pretty unmistakable, though—this almost has to be a top-end Alchemist part.


The fascinating part of the listing isn't the score. At 85448 points, it's a respectable result that puts it in the company of the GeForce RTX 2070, AMD Radeon VII, and Quadro GP100, but certainly nothing to write home about for a flagship product releasing in 2022. Keep in mind that this is an OpenCL compute benchmark that is almost totally unrelated to card's performance on gaming or other consumer workloads, and it's very likely that Intel hasn't gotten around to properly optimizing its OpenCL driver yet, either. 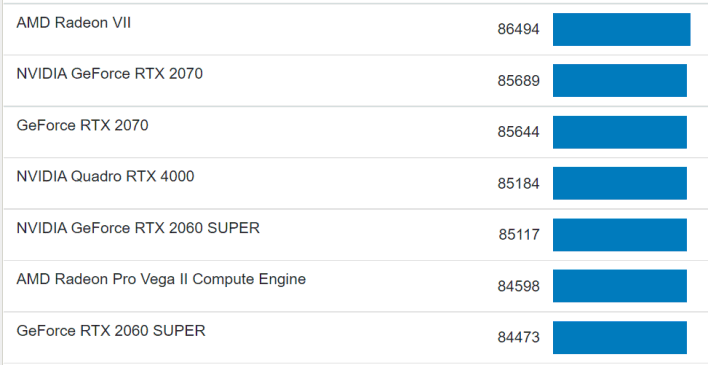 Other results around the same region as the leaked benchmark.


The fascinating part of the listing is in fact that Intel's pre-release GPU apparently turned in this score while scaling up to 2.4 GHz. Assuming Geekbench measured it accurately, that's an extremely high clock speed for a big GPU part like this. For comparison's sake, the green team's extant Ampere GPUs of similar size come in around 1.8 GHz. Meanwhile, AMD's hottest-clocked Radeons go all the way up to 2.8 GHz—though that's admittedly a much smaller GPU than Intel's DG2-512 is expected to be.

What sort of clock speeds these chips can actually achieve will depend, as it always does, on the core architecture and the chip fab process (TSMC). Assuming this leak is accurate, it seems like Xe-HPG might just scale to the sky, but time will tell in the days ahead if that matter all that much, in terms of raw performance.