What Shortage? Intel Aims To Ship Millions Of Arc GPUs To Gamers Every Year

Saying that the last two years has been a struggle for gamers trying to get an upgraded GPU is a huge understatement. However, Raja Koduri of Intel says that the company aims to get millions of GPUs into the hands of gamers every year.

Intel just had the most quarterly revenue ever in the more than 50 years of the companies existence. Even with the remarkable quarterly report, Pat Gelsinger, CEO of Intel, cautioned the GPU shortage will more than likely extend into 2023. But Raja Koduri, Senior Vice President and General Manager of the Accelerated Computing Systems and Graphics Group for Intel, posted on Twitter that the company aims to change the GPU market for gamers.

In the post on Twitter, Koduri recognizes that gamers have been having a hard go of it when it comes to getting their hands on GPUs. He also insists that Intel is working diligently to change that, and that its mission is to get millions of GPUs into the hands of gamers every year. A statement that should resonate well with gamers looking to upgrade their existing gaming rig. 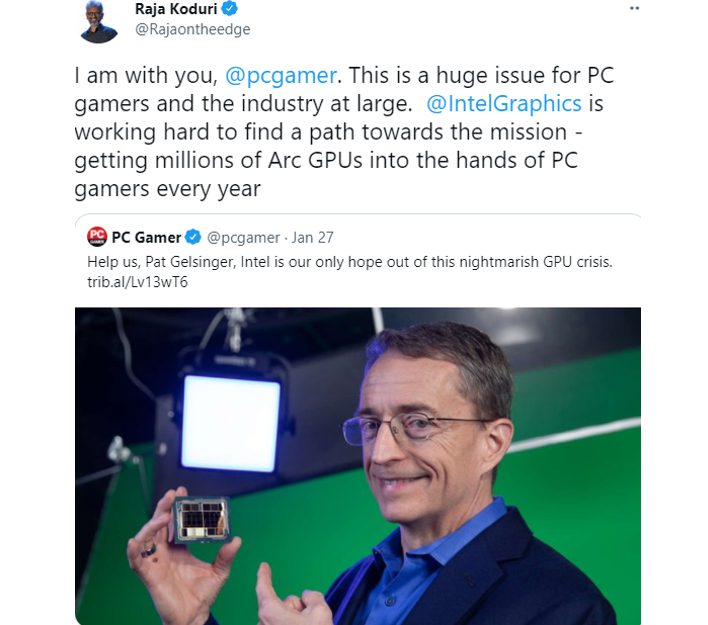 During CES 2022 Intel seemed to indicate that consumers would see the companies first dive into discrete GPUs in the form of laptops before seeing them for desktops. When we might see the first Intel Arc discrete GPU is still unknown, but some think it could be as early this coming week for the laptop variant (but don't hold your breath on that one). There have also been numerous leaks concerning the potential performance of the GPUs, but nothing solid and concrete as of yet.


Intel has certainly been hyping up its upcoming lineup of Intel Arc Alchemist GPUs, whenever they end up landing. The tech giant ran the Xe HPG Scavenger Hunt, which is giving away 300 Arc GPUs and 3,000 coupons for $50-100 off one of its GPUs at launch. While you can still enter that contest until January 31st at 11:59pm PT, don't expect to win a free GPU at this point. However, you still have a good chance of getting one of the $50 off coupons if you can beat the deadline.
Intel has confirmed at least four generations of the upcoming Arc GPU. The first is named the Alchemist, with the next three to be named Battlemage, Celestial, and Druid. You can definitely see a theme with the names. You should not expect Intel's first iteration, the Arc Alchemist, to outperform NVIDIA or AMD at the very top end. However, leaks suggest that its top GPU may rival NVIDIA's GeForce 3070 Ti in terms of performance. If the company is able to pull that off, it will be an impressive start to its venture into discrete graphics cards.

There is plenty of reason to be excited about Intel's upcoming GPUs. It means more competition, and that usually means more jumps in terms of performance each year as companies try to outperform one another. And with Intel it also means more chip production. Intel recently announced a $20B mega-site to be built in Ohio that is supposed to be the largest semiconductor fab on the planet. In an economy that has had gamers trying to upgrade their gaming rigs pulling their hair out, any help in getting their hands on a quality GPU at a reasonable cost is extremely good news.