Alder Lake is Intel's next significant architectural shift for its family of Core processors consumer desktop and laptop product segments. Intel's 12th generation processors will be built on an enhanced 10nm SuperFin process, feature a hybrid big.LITTLE-style core arrangement and support both DDR5 and PCIe 5.0 technologies.

The first Alder Lake processors are due during Q4 2021, although it's not clear if the desktop or mobile processor will launch first (or if they will launch simultaneously). According to previous rumors, a potential October launch for Alder Lake would coincide with the release of Microsoft's next-generation Windows 11 operating system. 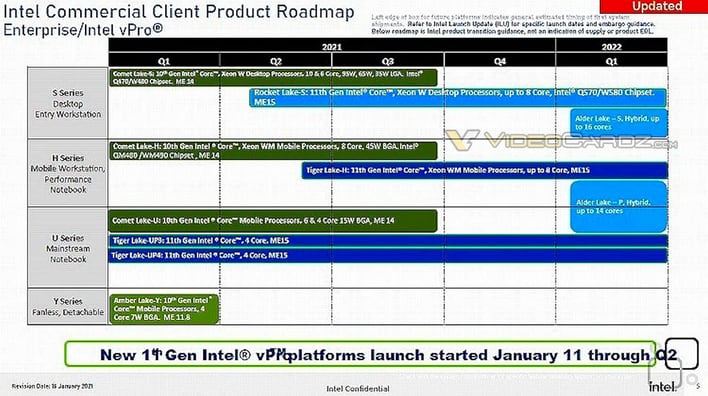 A newly leaked Intel Commercial Client Product Roadmap reveals that vPro variants of Alder Lake will appear in Q1 2022. This information comes to us from a leaked Intel roadmap obtained by VideoCardz. VPro SKUs cater to business customers rather than the commercial market. For reference, Intel's consumer-focused Tiger Lake mobile processors launched in late Q3 2020, and the vPro variants landed in Q1 2021.

According to the roadmap, the desktop Alder Lake-S processors will launch with up to 16 cores, while the Alder Lake-P mobile processors will feature up to 14 cores. Last week, it was revealed that the flagship Alder Lake-S desktop processor is the Core i9-12900K, which features 8 Golden Cove cores and 8 Gracemont cores. Only the Golden Cove cores are HyperThreading-enabled, which means that the Core i9-12900K has a total of 24 threads (instead of the assumed 32). In addition, the processor reportedly has a maximum boost clock of 5.3GHz across its "big" cores.

As for the Alder Lake-P mobile stack, we've already seen leaked roadmap details concerning U15, U28, and H45 Series processors featuring anywhere from 6 to 14 total processors cores. In addition, enthusiast-class Alder Lake-P processors (H45) will reportedly come with up to 6 performance cores, 8 efficiency cores, and a next-generation integrated Xe GPU with 96 execution units.

The latter half of 2021 is shaping up to be a big one of the tech industry. The combination of Alder Lake plus Windows 11 should make for a significant upgrade push that OEMs are sure to relish. We can only hope that the already strained global supply chain can keep up with demand.