Alder Lake leaks are just a way of life in the tech sector right now, because a formal launch is imminent—the closer we get to a product launch, the more persistent the leaks. So it's no surprise that we're starting off the work week with yet another one.This time it is the accompanying Z690 chipset that is on show, in a photo supposedly showing the PCH die.
Whether it is real or not, hey, who can say for sure? It very well could be, though, considering that Z690 motherboards are presumably in the wild, and have been for some time now. System builders and testers get their hands on this kind of thing long before launch, so that platforms and prebuilt PCs are ready to go on the day of release.
So what we have here is a photo posted to Chiphell, purporting to show the Z690 chipset on a board that was bound for an unspecified OEM. The poster says there was no heatsink attached, though it is not clear if one was simply removed, or had not yet been attached by whatever OEM was working on this model (it could be an older revision).
There's not a whole lot to glean here, other than it appears bigger than the Z590 chipset. It is also more rectangular in shape, just like Intel's Alder Lake CPUs will be. 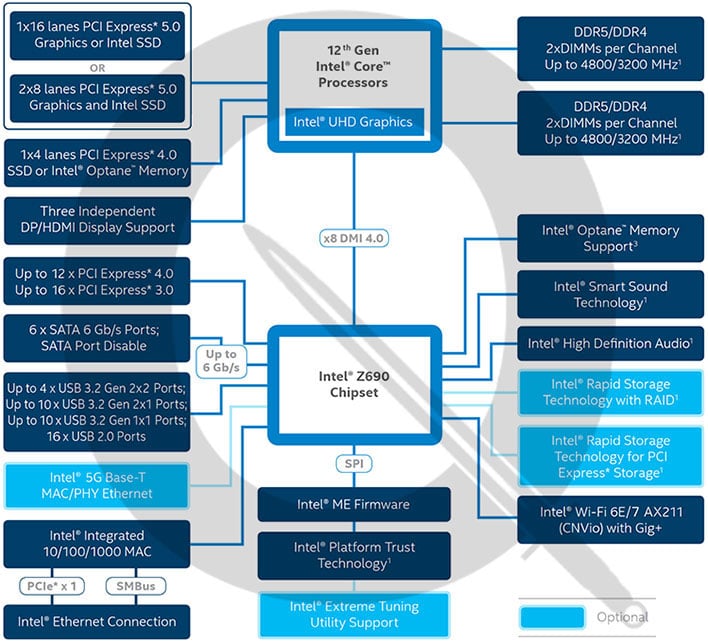 Just a few days ago, a supposedly leaked Z690 chipset diagram surfaced. It too shows a rectangular shape for the chipset. According to the diagram, Alder Lake will feature an upgraded Direct Media Interface (DMI) on Z690 boards, as well as up to 16 lanes of PCIe 5.0 traffic routed directly to the CPU (by way of 1x16 or 2x8), as well as four lanes of PCIe 4.0 traffic.
The chipset adds support for up to a dozen lanes of PCIe 4.0 and up to 16 lanes of PCIe 3.0 traffic, according to the diagram. There was also mention of Intel adding a Gear 4 mode for DDR5 memory, which would run at 1/4 speed (compared to 1/2 speed for Gear 2).
According to the latest unofficial chatter, Alder Lake will be announced in late October, and release to retail in mid-November. Meanwhile, Microsoft has confirmed that Windows 11, which is tuned to take advantage of hybrid architectures, will release on October 5.