There's a long history of vendor-locked graphical techniques that only see implementation in a few games. Names like Quincunx and Truform (among many others) resonate in PC gamers' memories, and it sometimes inoculates us against enthusiasm for new technologies. Intel doesn't want XeSS to go the way of the T-buffer, so it has created a plugin for the Unreal Engine that should make it significantly easier for game developers on that engine to integrate the AI-powered upscaling technology. 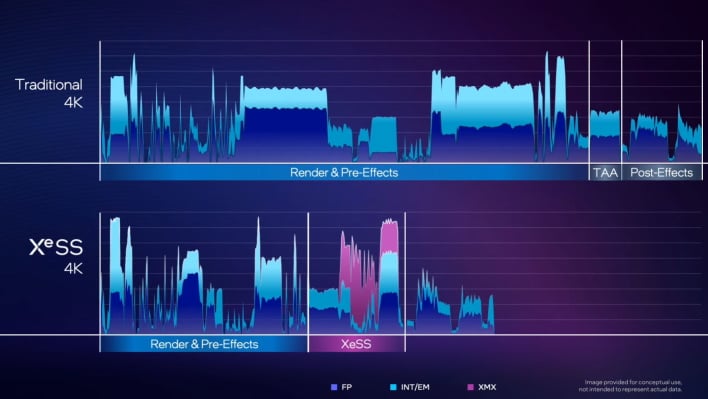 XeSS saves render time even though it costs some itself.


XeSS is Intel's competition for AMD's FidelityFX Super Resolution (FSR) and NVIDIA's Deep Learning Super Sampling (DLSS). Despite being Intel's first release of the upscaler, it is commonly referred to as a "second-generation" upscaler due to its similarity to those technologies. To put it very simply, the neural network powering XeSS reconstructs additional detail that isn't present at all in the low-resolution input using motion vectors from previous frames.


What this means for gamers is that, for example, you can run your game in 4K with XeSS set to "Performance" where the game engine will render it out in 1080p, and then XeSS will upscale it to your 4K display. In theory, this gives you near-native visual quality for drastically less GPU load, which ultimately increases framerates and/or reduces power consumption. In practice, results can be a little mixed for these technologies. Like with any temporal rendering tech, ghosting and other artifacts can be prominent.
XeSS is different from both DLSS and FSR. Unlike FSR 2 (which uses GPU-agnostic shader code), XeSS is hardware-accelerated using the matrix processors on Intel's Arc GPUs. However, compared to DLSS, Intel's tech isn't exactly vendor-locked and can run on any GPU—it's just that on chips besides Intel's, it uses a simplified algorithm based on DP4a math instead of Intel's own XMX instructions. The simplified version doesn't look as good as the real thing, nor as good as FSR 2.1, but not every game that implements XeSS will also have FSR 2.1.

If you're an Unreal developer who'd like to get started with XeSS, hit the company's Github repository, which includes both source and binary plugin packages for Unreal Engine 4.26, 4.27, and 5.0. If you're not accustomed to working with Unreal but you'd like to get into game development, well, you'd probably better learn something about Unreal Engine pretty fast. Here's some books on Amazon that might help.