Anyone with an aging GPU knows the struggle of trying to upgrade in this climate. Graphics card prices are through the roof, even when they're in stock by first-party sellers (Best Buy has been a pleasant exception here and there). So if you have some free time to spare, think about participating in Intel's Xe HPG scavenger hunt—you could win an Arc Alchemist graphics card when it releases next year.
This is a continuation of a teaser video Intel posted to Twitter earlier this year. The video contained a few semi-hidden clues that, when decoded, led internet sleuths to GPS coordinates at Niagra Falls, and eventually an IP address for Intel's Xe HPG scavenger hunt microsite. Now several months later, Intel is teasing a sweet giveaway... 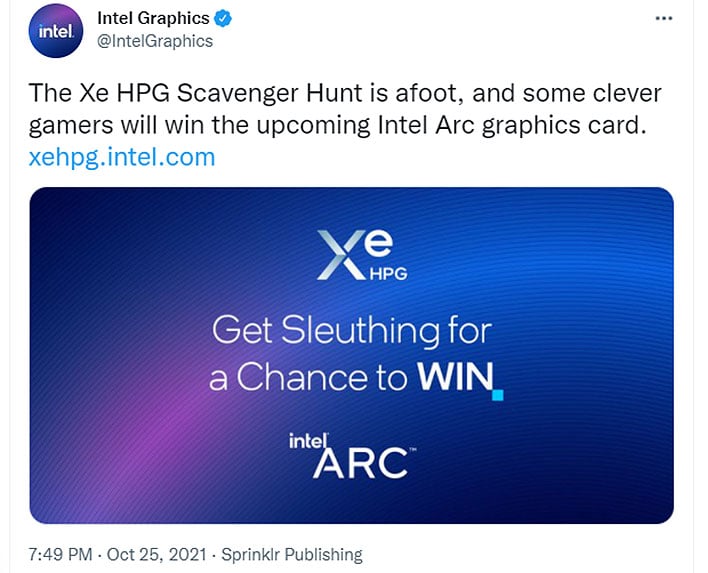 "The Xe HPG Savenger Hunt is afoot, and some clever gamers will win the upcoming Arc Alchemist graphics card," Intel states. There's an accompanying graphic that reads, "Get sleuthing for a chance to win."
What exactly that entails is not yet known, because the scavenger hunt has not actually started yet. It will very soon, though. Described on the microsite as "Phase 2," it kicks off October 27, 2021 at 9am PT (12pm ET). Here's how it work...
You also have to register in you want to participate (name and email). After doing so, it's revealed there will be 10 questions. You can also participate in Intel's leaderboard, if you choose (it's optional).
There are a whole bunch of Twitter accounts that will be dropping clues, including @IntelGraphics, @PGelsinger, @RajaOnTheEdge, @gfxLisa, @RogerDChandler, @BobDuffy, @CaptGeek, @theBrycelsRT, and @XboxGamePassPC.
Here's the best part, though—Intel's not just giving away one or two graphics card as part of a grand prize, but intends to award 300 Arc Alchemist GPUs "before they're even available!"

Good luck to anyone who participates, and be sure to check out the terms and conditions (which, incidentally, may have tipped the price of Intel's flagship Arc Alchemist card).