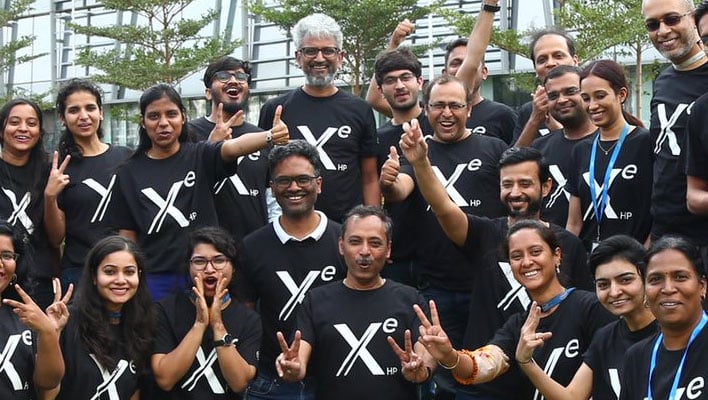 Intel continues to tease and hype its Xe graphics architecture as it moves increasingly closer to launching its first modern discrete GPU, which is as far as we know is still scheduled to debut sometime in 2020. While we wait, Intel's graphics boss, Raja Koduri, shared a couple of photos showing engineers wearing t-shirts with "Xe HP" imprinted on them.
HP presumably stands for "high performance" (and not "Hewlett Packard"). This is in line with Intel recently sharing some details about Ponte Vecchio, it's first base GPU architecture that takes aim at the high performance computing (HPC) and artificial intelligence (AI) markets.

It’s all Xe HP - the team here in @intel Bangalore celebrated crossing a significant milestone on a journey to what would easily be the largest silicon designed in india and amongst the largest anywhere. The team calls it “the baap of all” 😀 @IntelIndia pic.twitter.com/scBrFFmhtl

"It’s all Xe HP—the team here in @intel Bangalore celebrated crossing a significant milestone on a journey to what would easily be the largest silicon designed in India and amongst the largest anywhere. The team calls it 'the baap of all'," Koduri stated on Twitter.
"Baap" is Hindi for "father," so the team is calling this "the father of all" silicon. It's also the largest ever designed in India, according to Koduri.

In case you were wanting an Xe HP shirt, they might be available at some point. However, there apparently is a bit of additional information on the back of the shirts "that's not public information" yet.
That's kind of been par for course with regards to Intel's discrete GPU activities. Intel has shared some basic details, but there are still many questions that have yet to be answered, such as when a gaming-grade GPU will emerge, if real-time ray tracing hardware will be baked in, and so forth.
Circling back to Ponte Vecchio, Intel did confirm it is based on its 7-nanometer Xe architecture, which will underpin products across a wide range of computing sectors, from discrete cards for desktops and integrated notebook solutions, to the HPC market and data center. It will also be Intel's first 7nm product (as opposed to a CPU).
Whatever Xe HP part Koduri is teasing on Twitter is probably not the same as Intel's DG1 graphics card, which it recently powered on for the first time. Intel CEO Bob Swan had told investors that DG1 was built from the ground up. It's also presumably based on a 10nm architecture and is what we will see from Intel first.
DG1 is what we will likely see in 2020, followed by whatever Xe HP part Intel is working on coming out in 2021.