Like everyone else, we have so many questions about Intel's foray into the discrete GPU space. When will we see a consumer graphics card, and when it arrives, how will it compare to what AMD and NVIDIA have to offer? What about specifications and pricing? Will it be good mining? Just kidding about that last one, but not the rest.  While we wait for answers, another Xe GPU leak has emerged, and it supposedly shows the clockspeed of a desktop graphics card.
We say "supposedly" because you just never know when it comes to leaks and rumors. Not only can product names be spoofed in benchmarking databases, they can also be erroneously misread without any trickery involved, and of course specifications and performance of a pre-release part are not necessarily indicative of the final product.
Disclaimer out of the way, let's have a look at the leak in question... 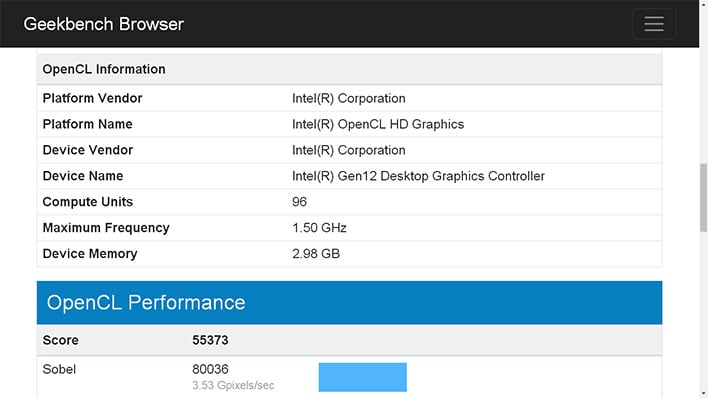 As spotted by APISAK, the Geekbench 4.4.2 entry identifies the GPU as a "Gen12 Desktop Graphics Controller," otherwise known as a discrete graphics card. The rest of the listing shows it was running alongside an Intel Core i7-8700 "Coffee Lake-S" processor with 16GB of DDR4 RAM, with Windows 10 Enterprise 64-bit installed.
According to the database entry, the mystery graphics cards sports 96 execution units (EUs), a 1.5GHz maximum clockspeed, and 3GB of onboard memory. 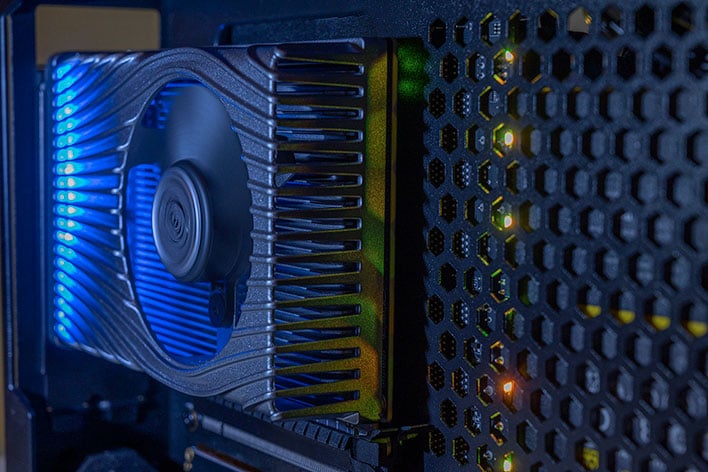 So, what are we looking at here? Assuming the listing is accurate, this is almost definitely an Xe DG1 graphics card, as was spotted hanging out in the EEC database last December. Intel provided a first look at the DG1 at CES earlier this year, and announced at the time that it was sampling the Xe DG1 Software Development Vehicle to ISV partners.
They are basically development models, and from what Intel has said, the specifications and performance are not what they will be on the final product. That said, as shown in the leak, the card posted an OpenCL score of 55,373. For reference, an AMD Ryzen 5 3400G with Vega 11 graphics running in a system with Windows 10 Pro 64-bit installed scored 58,152 in a separate Geekbench 4.4.2 database entry.
We would caution not to read too much into this. At a glance, it seems disappointing that Intel's first discrete graphics card gets overrun by Vega 11. That might end up being the case, or it might not—we just have no way of knowing at this early stage.