Intel has an interesting thing going with its Next Unit of Computing (NUC) lineup. In our NUC 9 Extreme Ghost Canyon review, we found the miniature PC to be a pint-sized powerhouse, which can be configured with up to an 8-core/16-thread Core i9-9980HK processor (as was in the model we tested). Looking ahead to what's next, a leaked slide purportedly reveals details about Intel's upcoming NUC 11 Extreme Compute Element.
The Compute Element is what drives the modern NUC experience. It looks like a graphics card, but is actually a removable add-in card that houses the processor, memory, chipset, I/O, and cooler, which then installs into a NUC chassis. The modular nature is intended to make future upgrades a relatively quick and easy affair without having to replace the entire chassis and power supply, and to allow for simpler integration. A discrete GPU (an actual graphics card) is optional.

As for the NUC 11 Extreme Compute Element that leaked to web, it highlights a transition to Intel's upcoming 11th Gen Core Tiger Lake-H lineup. Have a look... 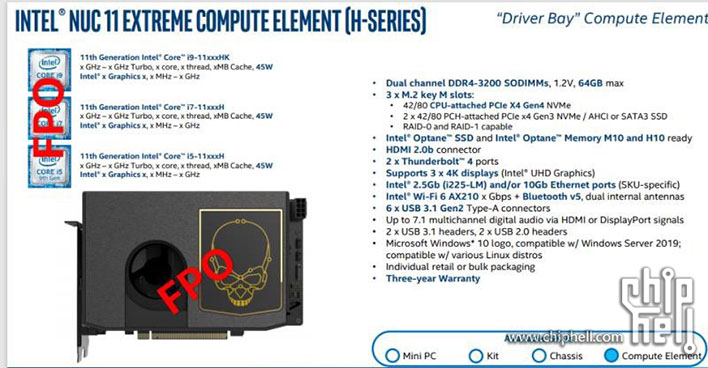 What looks to be an official slide offers some details about the hardware and features of the NUC 11 Extreme Compute Element, or "Driver Bay" if going by the codename. Assuming the slide is real and accurate, Intel will offer Driver Bay in multiple 11th Gen Core i5, Core i7, and Core i9 configurations, all of which fall under the Tiger Lake-H umbrella.
The shift to Tiger Lake-H brings with it support for PCI Express 4.0. This will mostly come into play for people who want to install a speedy PCIe 4.0 solid state drive (like Samsung's 980 Pro) into the NUC. Not all PCIe 4.0 SSDs are created equal, but at the top end, the fastest models are rated to push data transfers north of 7,000MB/s, which gets close to saturating the NVMe Gen 4 bus (8,000MB/s).

It will also support up to 64GB of DDR4-3200 memory (SO-DIMMs), and is ready for Intel's Optane memory, if a user chooses to go that route. Other features include two Thunderbolt 4 ports, an HDMI 2.0b connector, 2.5GbE and 10GbE LAN ports (depending on the specific SKU), Wi-Fi 6 (802.11ax) connectivity, and of course a bunch of USB ports.
Most of this stuff represents an upgrade over the NUC 9. Additionally, the slide also indicates that if tapping into the onboard graphics, the NUC 11 Extreme Compute Element can drive up to three 4K displays. You're not going to get very far trying to game at 4K on the onboard graphics, but this could come in handy in various productivity scenarios.
All that's missing is information on pricing and a release date. Stay tuned.