Intel talked a little bit about Sapphire Rapids, its next generation Xeon Scalable processor lineup, during its Architecture Day 2020 event last August. While it has always been assumed Sapphire Rapids will leverage Intel's upcoming Golden Cove architecture, just like Alder Lake, this has never been officially confirmed. Until now, that is.
It might be more of an inadvertent confirmation, or one that Intel was not necessarily ready to make public. Either way, a Linux engineer at Intel spilled the beans in a recent patch. In the patch notes, Intel's Andi Kleen clarifies an association with Sappire Rapids-X, which was previously labeled as being based on the Willow Cove architecture. 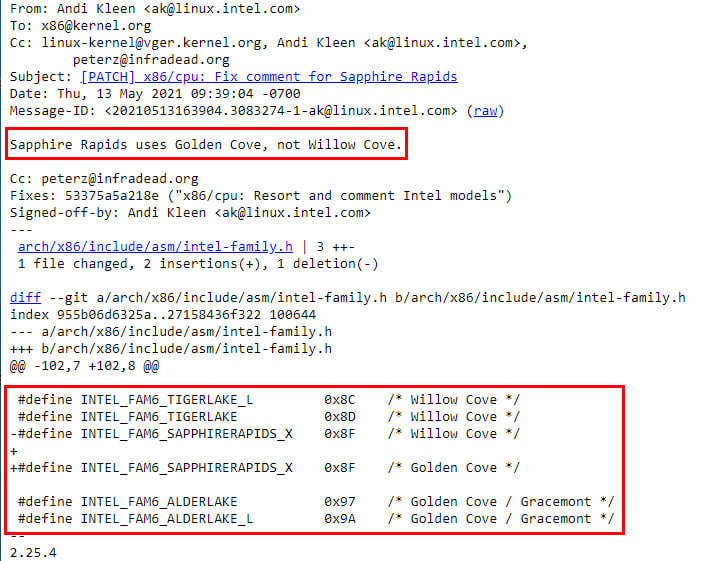 "Sapphire Rapids uses Golden Cove, not Willow Cove," Kleen wrote in no uncertain terms.
Though this has never been officially publicized before, it's not the least bit shocking. Intel already alluded to the use of its Golden Cove architecture when saying Sapphire Rapids is being built on an enhanced 10-nanometer SuperFin process, with several next-generation technologies in two—DDR5 memory and PCI Express 5.0 among them. 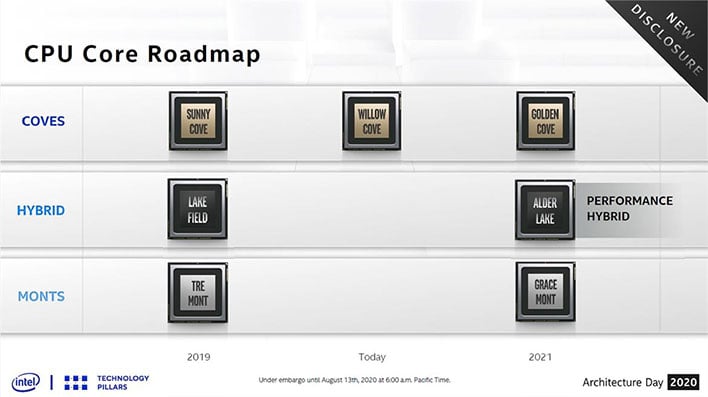 The above roadmap is in reference to Alder Lake, Intel's upcoming heterogeneous processor lineup that will mix high performance cores with power efficient cores on the same die. Going that route has been successful for Arm with its big.LITTLE branding, and Intel is hoping it will prove beneficial in the x86 segment as well.
As for Sapphire Rapids, it is bound for release later this year, just like Alder Lake. It would be odd for Intel to build its next-gen Xeon chips around Willow Lake rather than Golden Cove, given the timing and where these architectures reside on Intel's roadmap. Nevertheless, Intel had not confirmed that would be the case prior till now.
Recent leaks and rumors suggest Sapphire Rapids could have as many as 72 or even 80 cores in a full configuration, though it is unlikely we will actually see an 80-core/160-thread Sapphire Rapids CPU. As Intel has done in the past, some of the cores will likely be disabled on the top model, though we will have to wait and see.
In addition to leveraging DDR5 memory, Sappire Rapids will also feature on-package HBM support, according to an Intel Architecture document. All in all, on paper Sapphire Rapids looks to be an intriguing upgrade for the lucrative server sector. It will be interesting to see how the upcoming chips compete against AMD's EPYC 7003 series, both in performance and price.