Leaks pertaining to Intel's upcoming Alder Lake-S processors are piled up a mile high at this point, and they keep on coming. The latest one highlights an engineering sample that made a benchmark run in the free-to-play Dota 2 game, alongside an NVIDIA GeForce RTX 3080 graphics card and DDR5 memory running at 4,800MHz.
Alder Lake-S, as most of you reading this know by know, is a hybrid (or heterogeneous) architecture that will pair high performance cores with power efficient cores on the same slice of silicon. It's similar in concept to Arm's big.LITTLE approach, though very different in design—Alder Lake-S is very much a x86 CPU architecture.

We've seen a bunch of leaks surrounding Alder Lake-S up to this point, with different core and thread combinations. As for this latest leak, however, those details are missing. All we know is it is listed at 2.2GHz. Either the benchmark just pulled the base clock from the CPU ID string, or the frequency was locked at a low speed, being an early ES chip. From the outside looking in, there's no way to know for sure. 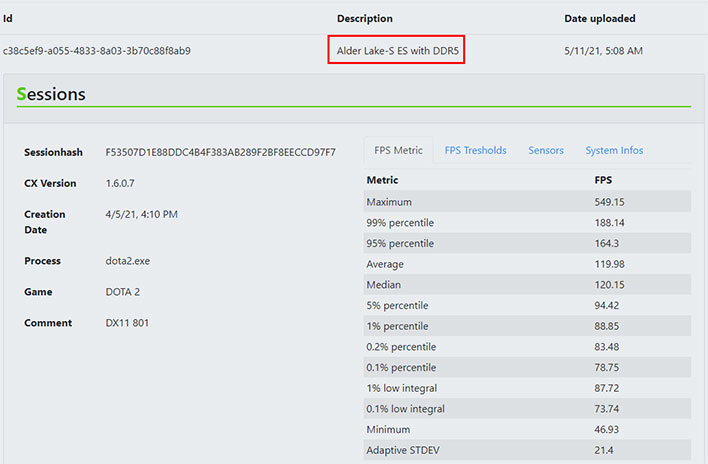 In the benchmark run, the setup averaged 119.98 frames per second, with minimum and maximum framerates recorded at 46.93 fps and 549.15 fps, respectively.
There's not much to extrapolate from the actual benchmark figures because (A) we have no idea how many cores and threads are at play, and (B) the listing does not mention the game's resolution or image quality settings. Nevertheless, it is interesting to see Alder Lake-S run through a gaming benchmark.
That has been a pretty rare scenario up to this point—the vast majority of benchmark leaks up to this point have shown Alder Lake-S running Geekbench and SiSoftware SANDRA. Rest assured, though, any worries that Alder Lake-S will not be suitable for a gaming PC appear unfounded.
No big surprise there, really. Alder Lake-S will leverage a 10-nanometer SuperFin process and should deliver a nice IPC (instructions per clock) bump over Rocket Lake-S. It will also feature support for both DDR5 and DDR4 memory (not on the same motherboard, of course) and PCI Express 5.0.
Rumor has it Alder Lake-S will launch in November, thereby beating AMD to DDR5 and PCIe 5.0, albeit not by much, assuming Zen 4 arrives early next year. Fun times await.