AMD and Intel are sitting pretty on Zen 3 and Comet Lake, respectively, but neither architecture represents the end game for either company. More chips are on the horizon, both on the desktop and in mobile. As it pertains to upcoming processor launches, there is a bevy of leaks to digest, including an Intel Rocket Lake-S desktop CPU and several AMD Ryzen 5000H mobile processors.
Starting with Rocket Lake-S, this is the architecture that will debut next year and the first from Intel to bring PCI Express 4.0 support to the desktop. Intel is claiming double-digit gains in instructions per clock (IPC) performance over Comet Lake. Incidentally, these next-gen CPUs will still be leveraging Intel's 14-nanometer node, and will top out at 8 cores and 16 threads.

We have seen a handful of Rocket Lake-S leaks already, and we can add one more to the pile, courtesy of a new Ashes of the Singularity benchmark database entry. Check it out...

The chip in question is an 11th Gen Core i7-11700KF. Based on this leaked benchmark entry, it sports 8 cores and 16 threads, with a 3.6GHz base clock. There is no mention of the max Turbo frequency or other details, like the amount of L3 cache, though it likely tops out at above 5GHz with at least 16MB of L3 cache. Why is that?
Well, it is replacing the current generation Core i7-10700KF (Comet Lake), which is also an 8-core/16-thread processor, with a 3.8GHz base clock and 5.1GHz max Turbo clock, and 16MB of L3 cache. It is a little odd to see the Core i7-11700KF sporting a slower base clock, but that could be a mis-reading by the benchmark, or a specification of an early engineering sample that will change when the final silicon ships.
As for the performance, it scored 11,300 with a GeForce RTX 3080 on board, with the CPU pulling 126.7 frames per second, at the 'Crazy 1440p' preset. Unfortunately, AOTS is not the best benchmark for making comparisons. For example, the Rocket Lake-S part performs about as well as a Core i9-10900K at the same setting, but worse than a Core i9-9900K or a Ryzen 5 5600X.

In addition to Rocket Lake-S, several of AMD's upcoming Ryzen 5000H series processors for laptops have found their way to the leaked benchmark scene, and specifically Geekbench. One of them is a Ryzen 9 5900HX. Have a look... 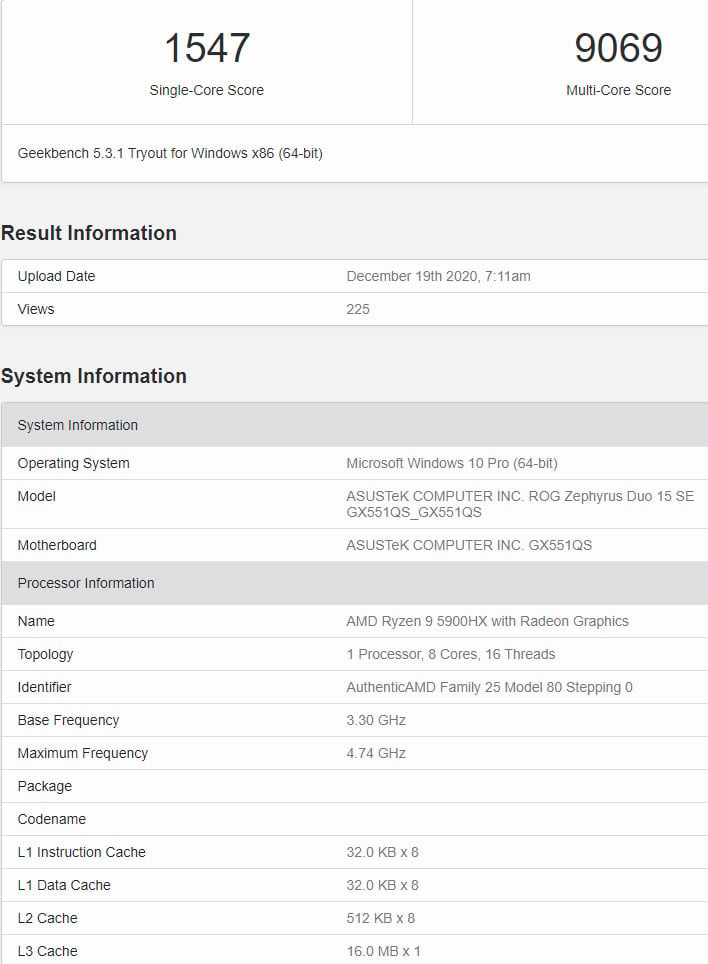 According to the listing, the Ryzen 9 5900HX is an 8-core/16-thread processor with a 3.3GHz base clock and 4.75GHz max boost clock. It also features 16MB of L3 cache. That is twice as much L3 cache as AMD's Ryzen 4000H series based on Zen 2.
There is another benchmark listing from this same processor with a slightly higher single-core score of 1,554. Likewise, there are multiple Geekbench entries for a couple other processors, including the Ryzen 7 5800H and Ryzen 5 5600H. Here are the best single-score and multi-core scores from each one...
All of these are presumed to be Zen 3 parts. This is worth pointing out because previous rumors suggest AMD will launch mobile CPUs within its Ryzen 5000H/U families that are based on Zen 2 as well.
Interestingly, there are also a couple of leaked entries purporting to show Intel's Tiger Lake-H processors for higher end laptops. Here's a look...
Out of this bunch, Tiger Lake-H emerges with the highest single-core score at 1,572, though the Ryzen 5000H series is not far behind, with it peaking at 1,554. And on the multi-core side, the Ryzen 5000H series takes the edge, as you would expect, given that it is working with more core and threads than Tiger Lake-H.
Expect all of these unreleased mobile CPUs to show up relatively soon, likely in the first quarter of next year. Same goes Rocket Lake-S on the desktop, presuming Intel sticks to its expected time frame (CES 2021 unveil).