In case you missed it, Intel this week released its first desktop Arc Alchemist graphics card, officially launching the A380 in China with a promise to "expand globally during the summer." Intel also posted an online quick start guide with a curious listing under the system requirements section—it calls for a 12th Gen (Alder Lake), 11th Gen (Rocket Lake), or 10th Gen (Comet Lake) Core processor to be paired with the GPU.
It doesn't look like a Comet Lake or newer CPUs is a hard and fast requirement to actually run an Arc Alchemist graphics card in your system, but as it stands, a relatively recent Core processor is needed to enable the Resizable BAR feature for "optimal performance."
Here's the pertinent entry in the quick start guide... 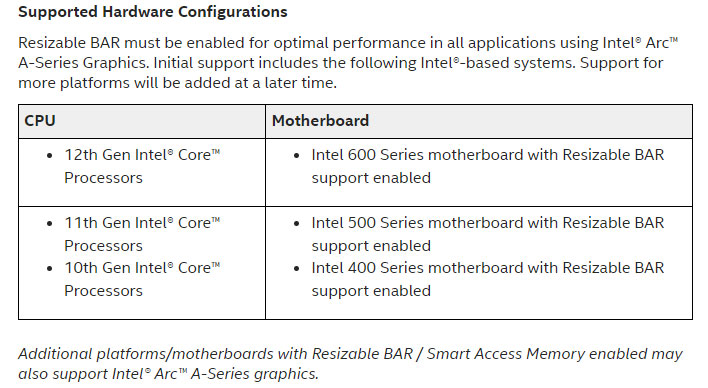 If you're running a Coffee Lake system or one that's built around an AMD processor, you're out of luck, as it applies to enabling Resizable BAR with Arc Alchemist. Well, at least for now anyway. Intel leaves the door open to enabling support on more platforms, and specifically mentions Smart Access Memory (SAM), which is AMD's own branding for Resizable BAR (**See update below**). Intel notes notes in the FAQ section that support for Resizable BAR on 10th Gen Core systems is not necessarily a given and "will vary."

We presume that enabling Resizable BAR is not a requirement to run an Arc Alchemist graphics card, though Intel stops short of plainly stating as much. It seems unlikely, though. The more pressing question is what kind of performance hit can users expect if they're not able to enable the feature. That's something we won't know until we've had a chance to test the A380, and/or other sites compare performance.
Resizable BAR/SAM is a PCI Express technology that essentially removes memory limits between the graphics card and CPU. Things like textures and shaders get shoveled into a graphics card's VRAM, and traditionally a CPU could access that information in 256MB allotments. Resizable BAR removes that cap, thereby enabling a CPU to access a GPU's whole frame buffer.
This can improve performance by removing a potential bottleneck. The gains are not astronomical—AMD's own testing when it announced SAM was 5-11 percent at 4K Ultra settings—but we've yet to see what impact Resizable BAR has on Intel's Arc Alchemist graphics cards because they're just now hitting store shelves. Time will tell.

Intel's Arc quick start guide also outlines how to enable the feature, and notes that you can check if Resizable BAR has been enabled by using Arc Control or the Intel Driver & Support Assistant Tool.
Update 6/23/22 - 2:00pm
A spokesperson for Intel reached out with the following statement/clarification regarding the staggered roll out strategy supporting SAM on AMD platforms:
"As we described in a blog post last month, the Arc graphics product rollout involves a staggered introduction on targeted platforms to most effectively serve our customer base. We are supporting Intel platforms with resizable BAR and will add support for AMD platforms with Smart Access Memory as Intel Arc graphics cards become available for sale as components." - Intel spokesperson