Intel Arc desktop graphics cards are real, and you can actually buy one—if you're in China, and have a need for entry-level discrete GPU. The specific model Intel is making available at this time is the Arc A380, which will probably be the fastest option in the "A300" series of Alchemist graphics cards.

Since this card is officially launched, there's no need to guess at the specifications. Intel has put up a page that lists all of the relevant numbers. We're looking at a DirectX 12 Ultimate-class GPU (that means it supports ray-tracing) with 8 Xe cores running at 2GHz. Those 8 Xe cores translate to 128 ray-tracing accelerators and 1,024 FP32 shaders. An unusual 96-bit memory interface running at 16 Gbps per pin connects 6GB of GDDR6 memory to the GPU, offering total memory bandwidth of 192 GB/sec. 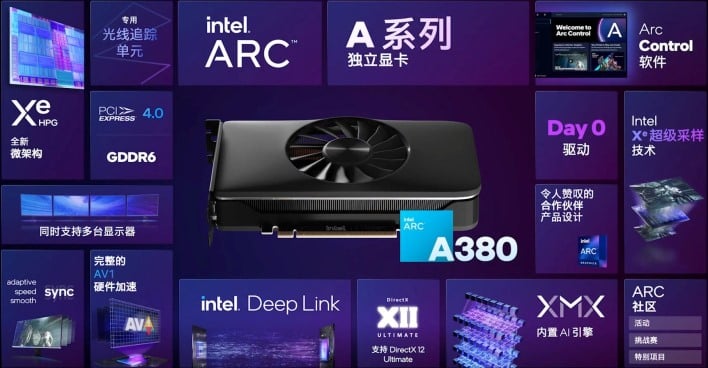 Comparing those specifications to AMD's similar-on-paper Radeon RX 6500 XT, the Intel card comes out well ahead in memory bandwidth, but significantly behind in clock rate. Of course, that 2GHz number is just a "base clock," so there's no telling how high the Arc A380 cards will boost. We're guessing probably not as high as the RX 6500 XT's screaming 2.9GHz boost clock, but the extra memory bandwidth will probably propel Intel to a few victories anyway.
Intel put up the press release on its website last night, which was probably this morning in Chinese time. The blue team positions the card as being intended for 1080p gaming at 60 FPS in eSports and MMORPG titles. Intel specifically names League of Legends, Moonlight Blade, Naraka: Bladepoint, and the confusingly-titled PUBG: Battlegrounds. Presumably the desktop A380 will be significantly faster than the laptop Arc A350M which we saw tested previously, so it seems likely that performance in these games won't be a problem, at least with moderate settings. 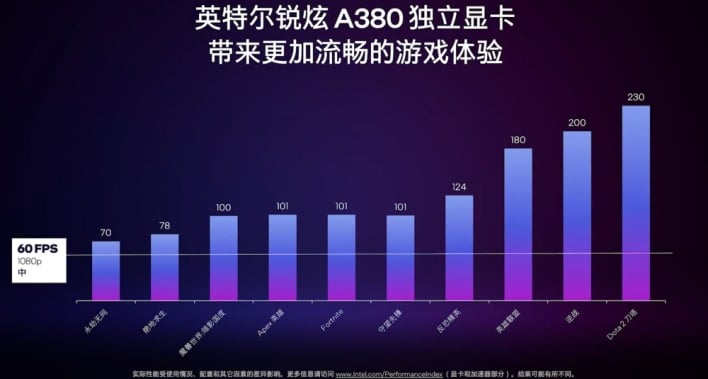 At least, those are Intel's official specifications, but there's already a partner card on the way, and we can take a look at it. Actually, you already have; it's the card pictured up above and down below. This specific Arc A380 card is from new Chinese vendor Gunnir, and the specifications are a little different from Intel's reference numbers.

Gunnir lists the "Intel Arc A380 Photon 6G OC" with the same 8 Xe cores and 6GB of GDDR6 memory that Intel specs, but the memory is slightly detuned to 15.5 Gbps while Gunnir actually lists the boost clock for its card: 2,450MHz.


That could actually be quite a bit higher than the stock boost of other A380 cards because this model, in addition to its lavish dual-fan cooler, sports an 8-pin power connector—something that will probably be absent on other A380 cards given the 75W reference TBP. Gunnir specs its card for 92W TBP, making the 8-pin connector somewhat glorious overkill, but as we say, overkill is the best kill.


The A380 cards have another advantage over the Radeon RX 6500 XT, too: four display connections. The tiny Radeon usually only has two display outs. Meanwhile, Intel's spec page doesn't mandate what kind of connections they have to be, but it lists four display outputs in either DP 2.0 or HDMI 2.1 form. Gunnir's card has three DisplayPort connections and a single HDMI port, much as you'd find on a higher-end GeForce or Radeon card, although curiously, the HDMI port is apparently just rev 2.0. No word on the capabilities of the DisplayPort connections.

The Radeon RX 6500 XT comparison is relevant because the suggested retail price for the Gunnir A380 Photon 6G OC card is 1099 RMB, or about $160 USD. That puts it in direct competition with AMD's card, as well as the older GeForce GTX 16xx cards. That doesn't mean it will be priced like that when these cards come to the west, of course, but it's a fair bet.

If you're Intel faithful, or simply want to get one of these to test it like we do, you'll need a contact in China, for now. It looks like the cards are only being officially launched there at this time. Intel says that A380 cards from familiar partners like Asus, MSI, and Gigabyte will come to other regions later this summer.