After laying low for a few months, Intel's chips based on Intel's upcoming Jasper Lake platform have made another benchmark cameo, this time over at SiSoftware's SANDRA database. There is not a lot to garner from the entries, other than the fact that Intel seems to be on track to add yet another Lake to its growing lineup.
Don't beat yourself up if you are having trouble following all of the different codenames. There are a lot of them, after all. Within the past year alone, Intel has introduced its mobile Ice Lake (10 nanometers) lineup and teased its upcoming Tiger Lake (10nm+) CPUs; it has launched Comet Lake on both the desktop (Comet Lake-S) and laptop (Comet Lake-H and Comet Lake-U); it is getting ready to launch Rocket Lake (14nm with a few plus signs); and will be unveiling a hybrid Alder Lake (10nm) lineup.
So, where does Jasper Lake fit into all this? It is poised to be the successor to Intel's Gemini Lake and Gemini Lake Refresh CPUs for low power devices, mainly represented by Intel's Pentium Silver and Celeron branding.
According to past leaks, Jasper Lake will use Intel's Tremont CPU architecture, which Intel announced last year. At the time, Intel described Tremont as a low power architecture that would underpin an array of processors and SoCs targeting products across the client, data center, 5G networking, and Internet of Things markets.
Here's a look at the leaked listing... 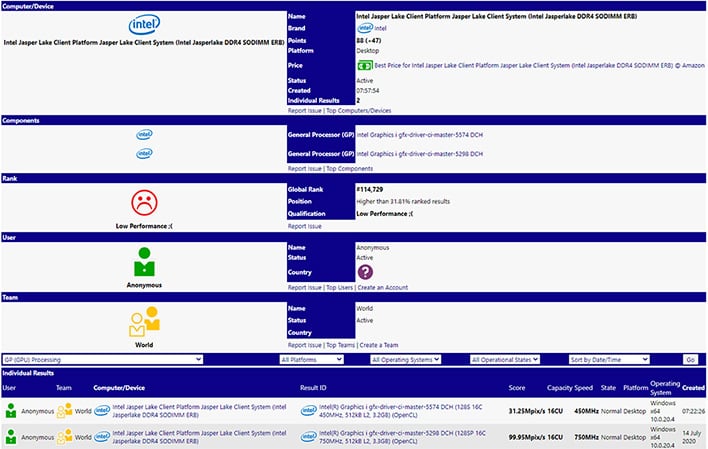 Jasper Lake is said to feature Intel's Gen11 graphics. This should provide a nice uptick in performance over the Gen9.5 graphics found on Gemini Lake. In this case, the leaked CPU is shown with a graphics system containing 16 compute units, scoring 31.25Mpix/s at 450MHz and 99.95Mpix/s at 750MHz.
No, you're not going to run Crysis on this thing. Nor is that what these kinds of chips are designed to do.
Previously, Jasper Lake was spotted hanging out at 3DMark's database (via @_rogame), in the form of a 4-core/4-thread processor with a 1.1GHz base clock and 1.12GHz boost clock. Jasper Lake is likely to boost higher than that when it ships, but it is still a low power series.