It is only a matter of time before we see how Intel's Iris Xe Max graphics performs in the real world, perhaps starting with Acer's recently announced Swift 3X, the first Tiger Lake laptop to flex Intel's discrete GPU. For now, however, leaked benchmarks are the only place to find some numbers, and so it goes with a couple of new listings on Geekbench.
We have not heard a whole lot about Iris Xe Max, and it was a bit of a surprise revelation when the first reference to the new part showed up in promotional video last night, which highlighted Intel's refreshed branding logos. That little blip between the 36 and 37 second mark served as confirmation that it exists, followed by Acer's Swift 3X announcement earlier this week.
Interestingly, the Swift 3X mates the Xe Max graphics to 4GB of LPDDR4X memory dedicated to the GPU (according to the fine print in the press announcement). Meanwhile, Intel's Xe DG1 card that it sent out to developers for testing features 3GB of GDDR6 memory (12Gbps). It also has 96 execution units (EUs), and the assumption has been that the Iris Xe Max is basically DG1 squeezed into a mobile form factor.
This brings us to the Geekbench entries, as discovered by APISAK. They appear to be from the same test system and user, just two different runs. Here is a look at how the graphics is identified in each one...

Geekbench recognizes the GPU as Iris Xe Max graphics, with it sporting 96 EUs, a 1.5GHz clockspeed, and 3GB of memory. This is paired with an Intel Core i7-8700 desktop CPU rather than a laptop configuration, with 16GB of DDR4 memory, so basically this is DG1 (unless I'm missing something, which is entirely possible).
The first listing shows it posting an OpenCL score of 11,857, while the second listing bumps that up a tick to 11,885. And quite frankly, neither score is spectacular. If we look up average OpenCL scores on Geekbench, Iris Xe Max as shown here falls behind Xe in integrated form. Have a look... 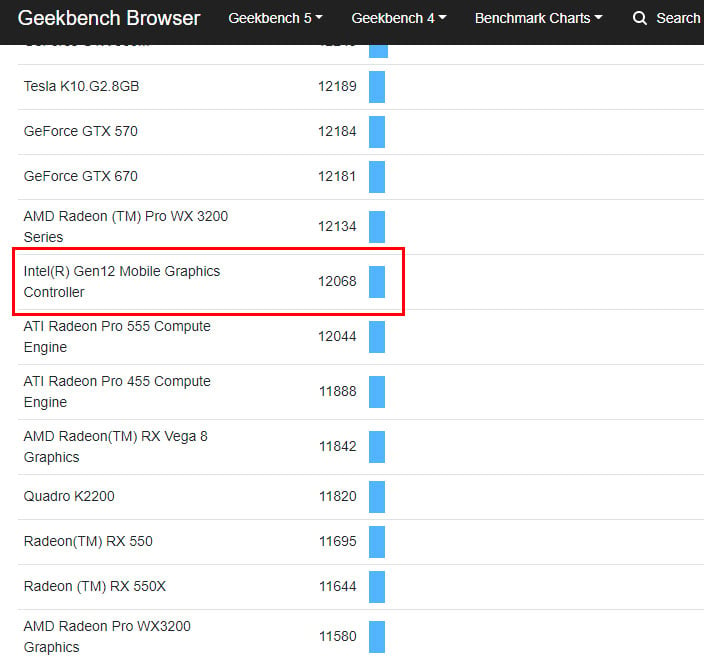 That is a little more encouraging for Iris Xe Max. In any event, we will have some real answers soon enough, with the Acer Swift 3X set to land on store shelves in December.