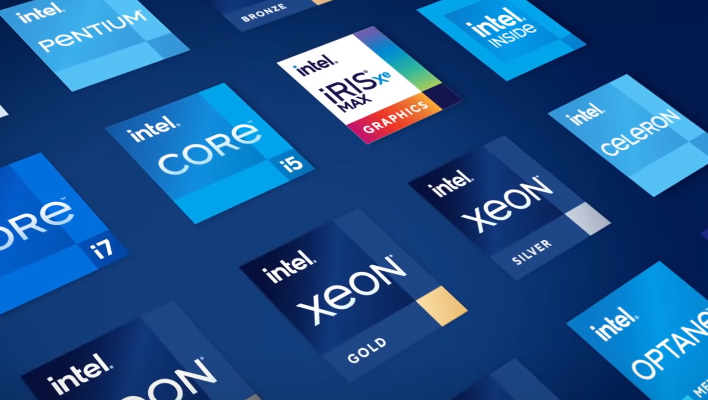 Intel is in the midst of refreshing its branding logos, with nifty new badges for its Core processors, Xeon chips, Optane memory solutions, and more. Many of these are on display in a promotional video titled "A Wonderful New Look," and for a brief moment—only about a second—we also get a look at an Iris Xe Max Graphics logo.
The revealing moment comes during the transition between 36 and 37 seconds, and is gone by the time the video advances to the 38-second mark. We have posted a screenshot above, but if you want to catch it in the video, get mouse finger ready to mash the pause button, and take a gander below...
"Start with Intel inside, and big things happen. Like a new logo, a new feel, and a whole new way to do something wonderful," Intel says.
You can also catch a new Intel jingle at the 57-second mark, to go along with the revamped logos and color schemes.
However, it is the Xe Max branding that is most notable, because it is the first we have seen of it. Hopefully some official details are forthcoming in the near future.

At this point, Intel's Xe graphics has already launched, having hitched a ride with the company's initial Tiger Lake processors for thin and light laptops. These range from the 2-core/8-thread Core i3-1110G4 with 48 execution units on the graphics portion, on up to the 4-core/8-thread Core i7-1185G7 with 96 EUs. These are all part of Intel's 11th Gen lineup.
Xe is the graphics architecture that will underpin Intel's discrete GPUs, across various market segments (low power solutions, gaming solutions, and the data center). The Xe Max is a mystery for the moment.

Incidentally, Intel has more powerful Tiger Lake processors on tap, including an 8-core model. These will likely be Tiger Lake-H models for more potent laptops, to go up against AMD's Ryzen 4000 series.
What this entails remains to be seen, but we could be looking at more execution units, faster clockspeeds, or both. Stay tuned.