Most of the talk about PC graphics these days is split between NVIDIA's recently launched GeForce RTX 30 series (Ampere) and AMD's upcoming Radeon RX 6000 stack (RDNA 2). Fair enough, but there is another player you may have heard about: Intel. We are still waiting for Intel to release its first discrete GPU to the desktop, but in the meantime, its recently confirmed Iris Xe Max GPU has made a benchmark cameo.
For anyone who missed it, Intel last month began refreshing its Core and other branding logos. It released a promo video offering "A Wonderful New Look" at the new logos, and if you freeze the video at the right moment, you can clearly see the Iris Xe Max badge. Here is what it looks like... 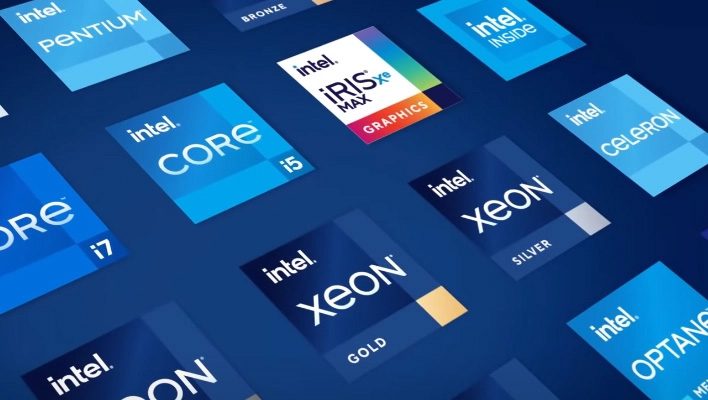 Intel also updated its iconic jingle, but that is neither here nor there. What made this seemingly mundane update interesting is that it was the first we had seen the Iris Xe Max branding. Speculation holds that it will accompany Intel's upcoming Tiger Lake-H processors that will find their way into workstation-class and gaming laptops early next year.
This has already been spotted in some kind of laptop, with a leaked graphic indicating a 45W Tiger Lake-H CPU with an Intel DG2 GPU sporting 8GB of GDDR6 memory. We will have to wait and see, of course, but further evidence can found in an interesting SiSoftware SANDRA database entry. Have a look at the entry in question... 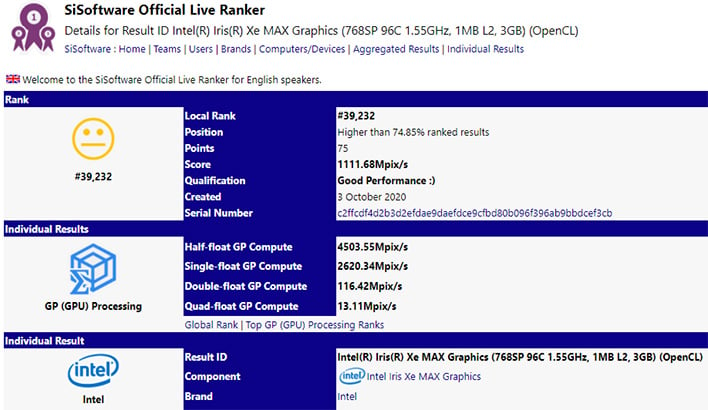 It is not entirely clear what system we are looking at here, only that Intel's Iris Xe Max graphics is apparently in the wild, and has been benchmarked. According to the database entry, this version sports 768 streaming processors (96 execution units) a 1.55GHz clockspeed, and 1MB of L2 cache.
Comparing scores in SANDRA is challenging because there are so many variables involved, including which version was run. But to give a rough example, here are the scores of the Iris Xe Max GPU compared against a recent entry for Intel's UHD Graphics 630 and another for a GeForce GTX 1050 Ti...

Not too shabby, though we would caution not to read too much into these comparisons. That said, it will be interesting to see Intel's Iris Xe Max graphics actually performs when it arrives.