In the early going, there is a single chipset available for Alder Lake—Z690, which happens to be Intel's flagship offering. That's not surprising, as chip makers like to put their best feet forward when launching generational products. However, more mainstream chipsets are on the horizon and a fresh leak purports to show how they compare to Z690.
It is generally assumed that Intel will flesh out its Alder Lake chipset family with H670, B660, and H610 offerings. While nothing has been announced yet, it would be odd for Intel to suddenly change up its naming convention, even with Alder Lake introducing a different kind of makeup compared to most past releases (save for Lakefield, to some extent).
That seems to be the case according to a new leak, which compares all three chipsets side-by-side, along with Intel's existing Z690 chpset. Have a look... 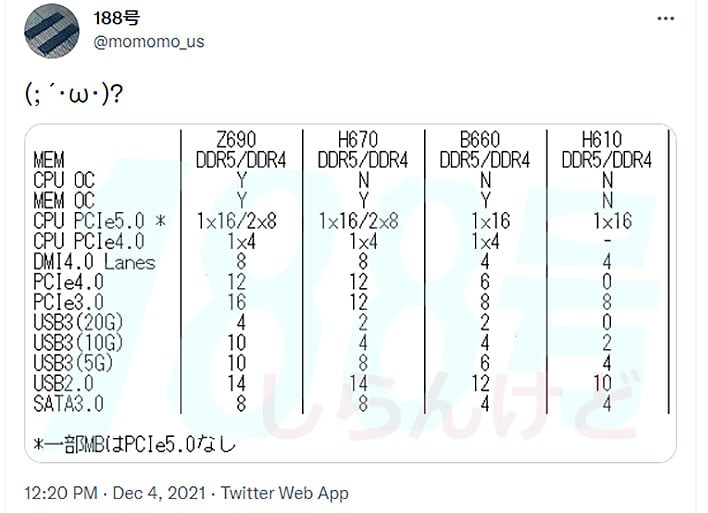 There are a few interesting details that stand out. One of them is the apparent support for DDR5 memory across the board, right on down to Intel's entry-level H610 chipset for budget builds. If this is an accurate leak, then every single chipset for Alder Lake will support both DDR5 and DDR4, as is the case right now with Z690.
Of course, it will be up to the motherboard makers to take advantage of either memory type. Take for example ASRock's current lineup of Z690 motherboards. Out of the 13 models it currently offers, four of them support DDR5 while the other nine ride with DDR4.
The other big question mark is PCI Express 5.0 support. Last month a reviewer claimed to have received an ASUS Z690 motherboard for testing in a retail box for an unreleased Prime B660 - Plus D4 model. According to the sticker on the box, that board only supports PCIe 4.0.
Looking at the leaked spec sheet above, however, every Alder Lake chipset will support PCIe 5.0. The B660 and H610 chipsets will offer up a single PCIe 5.0 slot, though if the aforementioned retail packaging is any indication, this could be optional.
There aren't any other real surprises in the leak. H670 looks to offer many of the same core features as Z690 for people who aren't interested in overclocking, while B660 and especially H610 tone things down for what should amount to cheaper price points.