The battle in the high-end graphics market is starting to heat up now that NVIDIA is rocking our world with its 4K beast GPU: the GeForce RTX 3080. And we can't forget that AMD is readying its Radeon RX 6000 "Big Navi" graphics cards for a late October reveal.

But there's also another player that is looking to make its presence known in the graphics market, and that's Intel. We've already gotten a glimpse at what its 12th generation Iris Xe graphics can do when coupled with 11th generation Tiger Lake processors, but the company has an even beefier discrete GPU in the pipeline for its upcoming Tiger Lake-H processors that will be going into workstation-class and gaming laptops early next year. It's likely that the 45-watt Tiger Lake-H processor seen in the graphic below is the 8-core part that we reported on earlier this week, which Intel has already confirmed.

The new Intel GPU reportedly can be equipped with a maximum of 8GB GDDR6 memory, and interestingly, the DG2 is rumored not only for laptops, but also desktop systems. According to additional reporting by Videocardz, DG2 will be available in three SKUs with either 128, 384 or 512 execution units. The top-end 512EU DG2 with 8GB of GDDR6 is rumored to feature a 256-bit memory interface, while a lesser SKU with 384 execution units and 6GB GDDR6 (pictured below) is primed for a 192-bit memory interface. 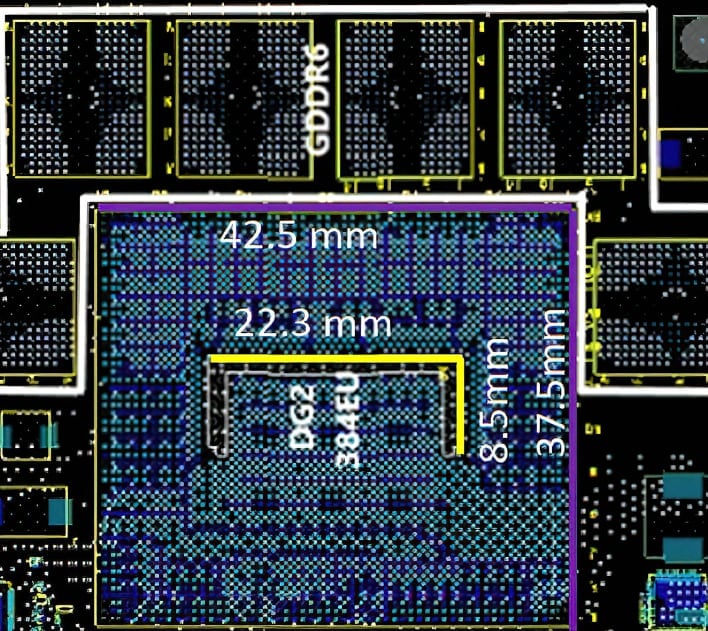 At this point, we don't really have any third-party numbers on performance for the integrated Iris Xe graphics in Tiger Lake, but we can genuinely assume that despite the fact that Intel is promising a huge generational uplift in performance, it isn't nearly as fast as NVIDIA's GeForce MX450. We say that because a number of Tiger Lake laptops that were announced earlier this month include NVIDIA's new Turing-based entry-level discrete GPU. The GeForce MX450 is roughly 33 percent faster than its GeForce MX350 predecessor according to leaked benchmarks, and we'd imagine that the DG2 will be even faster still when paired up with Tiger Lake-H. Perhaps something in the neighborhood of the GeForce GTX 1650 Ti? And could this new Intel GPU be Iris Xe Max?

However, this is all speculation at this point, but we'll keep our eyes peeled for more info as it comes in.