At some point, Intel is going to throw its hat into the discrete gaming graphics card ring with products based on its next-gen Xe-HPG GPU. Exactly when and what specific products will be offered are questions that will be answered in time, no matter how impatient we are to learn more. As we wait, a new leak suggests Intel could be prepping at least half a dozen Xe-HPG solutions.
Up to this point, Intel has teased us with a spattering of details about its discrete GPU efforts, especially as they relate to gaming. For example, we know its Xe-HPG solution will feature dedicated hardware for real-time ray tracing, a feature both AMD and NVIDIA have embraced. Likewise, Intel has said to expect amenities like game sharpening and variable rate shading.
Finer details have not yet been shared, though Intel's Raja Koduri did recently post a screenshot teasing an Xe-HPG GPU running the new 3DMark Mesh Shader test (which at the time, had not yet been added to 3DMark, but is now available). Other than specifying what the screenshot represented, Koduri was mum on revealing details.
That brings us to the latest leak. Twitter user @OneRaichu tweeted out a cryptic message, which was quickly unscrambled and decoded, and shared out by prominent leaker @harukaze5719. Have a look... 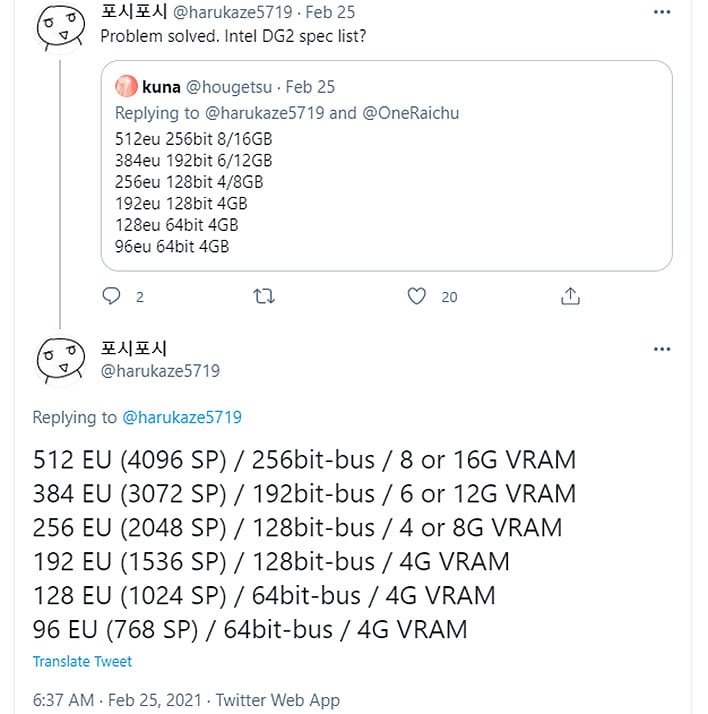 If the leaked information is accurate (and who really knows), Intel's upcoming DG2 solution will span six different configurations, ranging from 96 execution units (EUs) and 768 streaming processors (SPs), on up to 512 EUs and 4,092 SPs.
In other words, this suggests Intel is planning a fleshed out series of DG2 cards. This is rather exciting, especially when looking at the memory configuration. At this early stage, there is really no way of reliably comparing how 512 EUs will compare to AMD's Radeon RX 6800 series and NVIDIA's GeForce RTX 30 series. However, having up to 16GB of video memory hints that Intel is shooting for the high-end.
Perhaps the flagship model with a 256-bit bus and 16GB of RAM will compete with the Radeon RX 6800 XT or GeForce RTX 3080. That would be a solid introduction from Intel, given these are going to be its first-gen efforts in the discrete gaming GPU space.
You might be thinking that's crazy, because even if we can't accurately compare specs from an unreleased product to that of existing GPUs, the SP counts look low, versus the competition. But it's all about the architecture.