It is often said that records are meant to broken, like when Steph Curry overtook Ray Allen to become the NBA's all-time three-point leader last week. Every once in a while, however, records end up in a tie. Such is the case with Cinebench R20. One of the world's top-ranked overclockers, Allen 'Splave' Golibersuch, cranked Intel's Core i9-12900K Alder Lake processor well past its limits and scored 15,664 in Cinebench R20.
That matches what was achieved by a heavily overclocked AMD Ryzen 9 5950X processor almost a full year ago, and yes, Splave was the one who accomplished that feat as well. So in essence, Splave still owns the highest Cinebench R20 score of all time, but it terms of silicon bragging rights, AMD and Intel now share the honor.
"How to keep both CPU manufacturers happy.... get a tie score for 16x category with yourself. Style points or nah?," Splave wrote on Facebook.
Both chips required a bath in liquid nitrogen, because these kinds of benchmark records pretty much always require exotic cooling (compared to air and water). In this particular instance, Splave achieved the record score with a test bed comprised of an ASRock Z690 Aqua OC motherboard, 32GB (2x16GB) of TeamGroup DDR5-6400 RAM,  a GeForce GT 1030 graphics card, a 1,250W Enermax Maxtytan power supply, and Windows 10 (21H2). 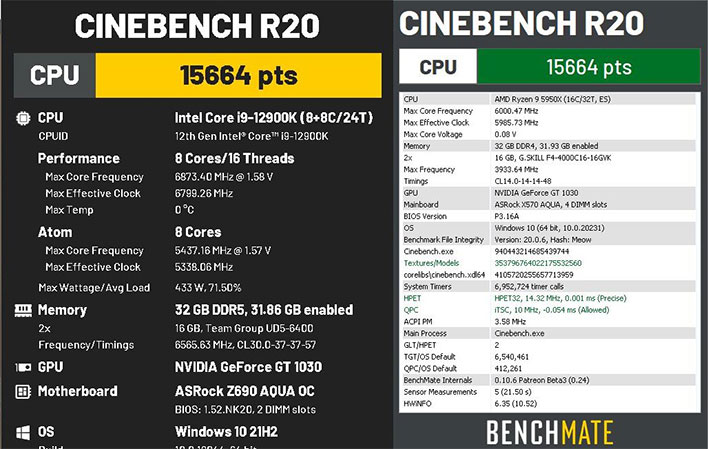 To achieve the record score, Splave cranked the core voltage to 1.58v and proceeded to overclock the Core i9-12900K's P-cores (Golden Cove) to nearly 6.9GHz (6,873.40MHz, to be precise). The E-cores (Gracemont), meanwhile, ran at a little over 5.4GHz (5,437.16MHz) at 1.57v. You can see these stats on the left-hand column in the image above.
On the right, we have a breakdown of the stats from the same record score achieved with a Ryzen 9 5950X processor in January 2021. Splave goosed the Zen 3 chip to few ticks over 6GHz (6,000.47MHz) and leveraged all 16 cores and 32 threads. He used the same GeForce GTX 1030 graphics card and Enermax power supply. As for the rest of the test bed, it was comprised of an ASRock X570 Aqua motherboard and 16GB of G.Skill DDR4-4000 memory.
In some respects, this is a win for AMD, in that it's comparatively dated Zen 3 architecture was able to hold onto the record score against Intel's finest (and recently launched) 12th Gen Core silicon. Though as we saw in our Alder Lake performance review, Intel's latest architecture is in very good shape.
There's a high chance this record will eventually be broken, and probably by Splave. For now, however, there's something poetic about letting AMD and Intel share the spot on top of the mountain.