Gigabyte is tickled pink that one of its high-end motherboards was used to set an overclocking record with Intel's flagship Core i9-11900K processor based on Rocket Lake. Liquid nitrogen should take a bow as well, because it took frigid temperatures to allow Intel's flagship CPU to hit an insanely high 7,314MHz, which then broke a couple of benchmark records.
The Core i9-11900K just recently made its retail debut, alongside the Core i7-11600K. Underneath the heat-spreader of the higher-end part is a monolithic, 8-core/16-thread design manufactured on Intel's 14nm++ process. At stock settings, it features a 3.5GHz base clock and up to a 5.3GHz turbo frequency, with a rated 125W TDP.
That's all fine and dandy, but Gigabyte says its Z590 Aorus Tachyon motherboard is "designed by overclockers" to break the world record, and that's what happened. 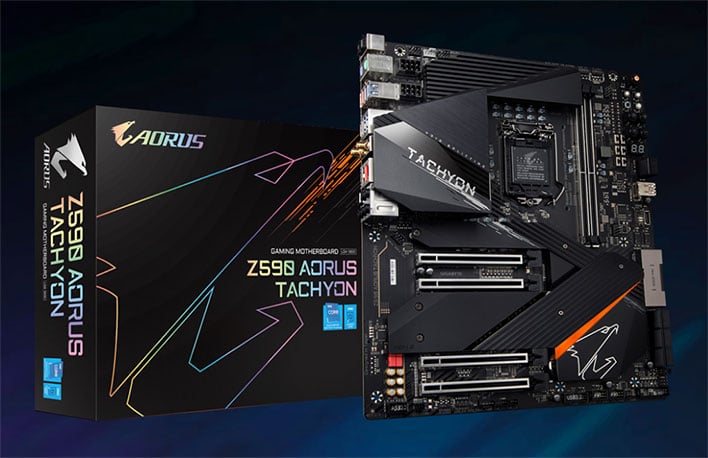 "Z590 Aorus Tachyon adopts 12+1 direct phases power supply, which each of them can hold up to 100 amps with its DrMOS power stages design to provide comprehensive power management. The VRM area implements a full tantalum capacitor matrix, which enables the lower overall temperature and more stable overclocking," Gigabyte explains.
"Furthermore, the latest Reactive Armor solution uses an integrated one-piece metal heat sink to provide larger heat dissipation range of MOSFET, while the multiple skived fins and grooved surface provide two times larger dissipation area than traditional design that improves dramatically the heat convention and conduction by allowing more airflow pass through the heatsink," Gigabyte adds.
It's a high-end motherboard for sure, and not for the faint of wallet—built for extreme overclocking, the Z590 Aorus Tachyon is up for pre-order at B&H Photo for $530. 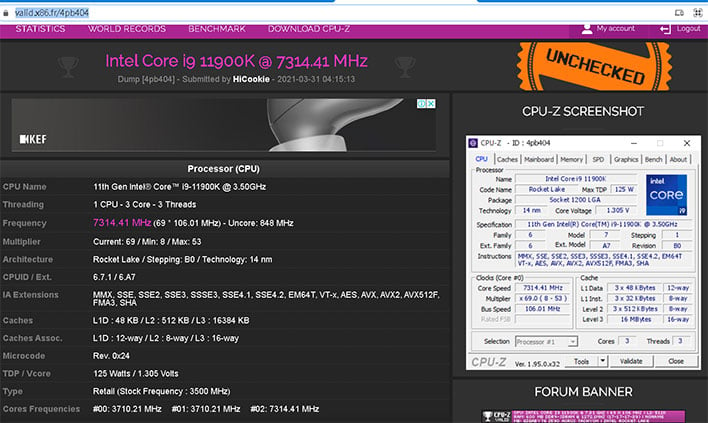 Professional overclocker Hicookie got their hands on one and promptly got to work coaxing speeds out of the chip that go far beyond stock settings. Where they settled at was a little bit past 7.3GHz, as shown in the screen capture above.
It took 1.305V to nudge the Rocket Lake-S part to such a fast frequency. We can also see that Hicookie disabled five of the eight cores, achieving the 7,314.41MHz clock speed on the three remaining cores. Hey, even with LN2, compromises sometimes have to be made.
Hicookie went on to set a couple of benchmark records with the overclocked CPU, albeit at a slightly more tame 6,962.3MHz. At the time of this writing, they sit atop both the SuperPi 1M (4sec684ms) and SuperPi 32M (3min47sec140ms) rankings.
Good stuff, though you know what they say—records are meant to be broken (just a few days ago, we wrote about an overclocking duo pushing the chip to 6.5GHz). We have little doubt someone will push the Core i9-11900K even further, likely with liquid helium cooling.