There is overclocking, and then there is extreme overclocking, the latter of which requires equally extreme cooling solutions. The go-to method of choice for record overclock attempts is liquid nitrogen, otherwise known as LN2. And it was LN2 that a pair of overclocking enthusiasts in India employed to bring an Intel Core i9-11900K processor all the way to 6,500MHz (or 6.5GHz).
The 11th Gen Core i9-11900K is the flagship processor within Intel's brand-spanking-new Rocket Lake-S desktop lineup. It sports an 8-core/16-thread configuration with a 3.5GHz base clock and up to a 4.8GHz all-core and 5.3GHz single-core turbo frequency, both via Thermal Velocity Boost.
Incidentally, the all-core frequency can ramp even higher—up to 5.1GHz—via Intel's new Adaptive Boost technology.

Either way, the top stock frequencies are a long way from 6GHz, let alone 6.5GHz. To get there, the folks at PC Wale kept pouring LN2 into a pot attached to the CPU, as shown in the video above.
There is a bit of a seemingly dicey moment at around the 4min43sec mark, when one of the overclockers tips a giant vat of LN2 to pour the frigid liquid into a thermos, which he is holding in his bare hands. Some of it spills over the side, missing his fingers and also his bare feet. While not exactly the safest thing in the world, as YouTube channel The King of Random demonstrates, coming into direct contact with LN2 is not necessarily disastrous (don't try it at home, though!).
The cost, risks associated with its handling, and need for a steady supply of LN2 are reasons why it is not a mainstream cooling solution—air coolers (active and passive) and liquid coolers (both custom and all-in-one) have that territory all to themselves. Nevertheless, it is fun to see what PC hardware is capable of achieving when heat buildup is removed from the equation. 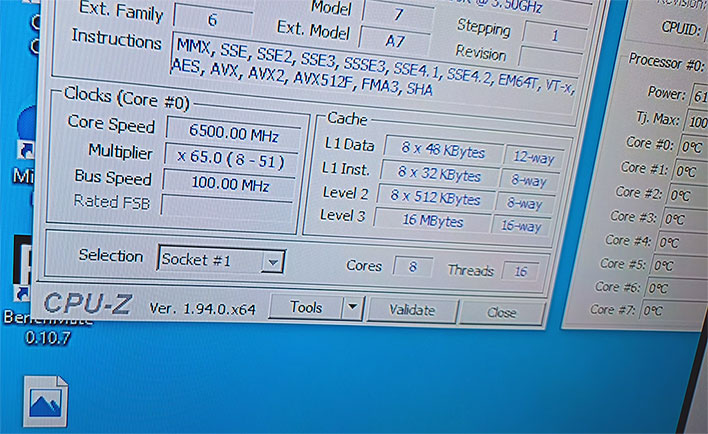 In the video, we see the overclockers push the Core i9-11900K past 6GHz, and eventually to 6.5GHz for brief stints. Attempting to go any further resulted in the system crashing. Be that as it may, they are confident they could coax the chip to even higher points, perhaps even to 7GHz and beyond, with a better BIOS.
As is, it required 1.7V to get the CPU to 6.5GHz. Since this was a review sample, the overclockers did not post any benchmark figures or showcase any benchmark attempts at the eye-popping frequencies (we still have a few days to go before Intel's NDA on Rocket Lake-S benchmarks lifts). So whether the Core i9-11900K is stable enough for benchmarking at 6.5GHz with LN2 is still not known. The only thing we can right now is that is not practical, but practicality goes out the window with this sort of thing anyway.

Performance metrics aside, this is an impressive overclock. We also anticipate seeing more of this in the weeks and months to come, as Rocket Lake-S gets into the hands of more users and especially into the mitts of more extreme and/or professional overclockers.