We are now just a few weeks away from Intel releasing its next-generation Rocket Lake-S CPUs to retail, which will do battle with AMD's Zen 3 lineup for desktop supremacy. In the lead-up to the retail launch, more leaked benchmarks have emerged, this time highlighting two SKUs, the upcoming Core i9-11900K and Core i7-11700K.
Before we get to the two separate leaks, let us talk about Rocket Lake-S for a moment. Rocket Lake-S is set to be the last major release on Intel's 14-nanometer node. It is a major new architecture, though, based on Cypress Cove, which itself is a 14nm backport of Ice Lake's 10nm Sunny Cove cores.
Rocket Lake-S will bring about some new features, like PCI Express 4.0 support, and top out at an 8-core/16-thread configuration (rather than 10 cores and 20 threads like Comet Lake-S). According to Intel, its 11th Generation Core desktop chips will deliver a 19 percent IPC (instructions per clock) boost. We shall see.

As for the recent performance leaks, there is a Chinese-language video on YouTube showcasing a Core i9-11900K QS (Qualification Sample) chip. It is an 8-core/16-thread processor, with the QS chip clocked at 3.5GHz (base) to 5.3GHz (max turbo via Thermal Velocity Boost). This was nestled into a Z590 motherboard with DDR4-4000 RAM, and then run through a few different benchmarks.
Here's a look at one of them... 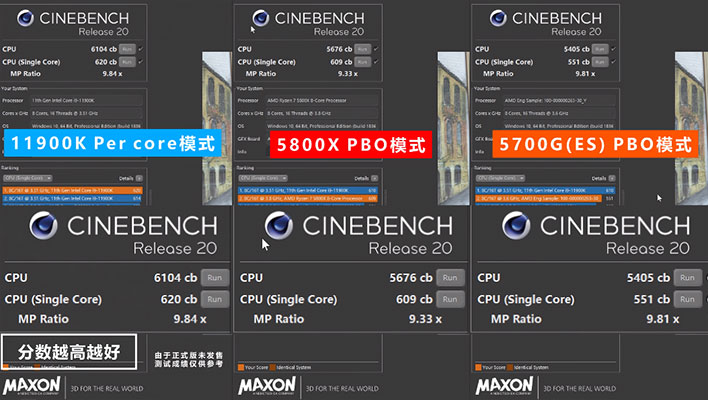 In the Cinebench R20 test, the Core i9-11900K edged out AMD's Ryzen 7 5800X in single-threaded performance, with a score of 620 versus 609. It also scored higher in a handful of other benchmarks, including Cinebench R23 (1,661 versus 1,569), and CPU-Z (719.6 versus 657). The same trend applied to multi-core results as well.
The script seemed to flip a bit in gaming benchmarks. It is difficult to fully parse the video without understanding Chinese, and without static results (the gaming benchmarks are constantly running with results changing by the second). But from what we can tell, the Ryzen 7 5800X paired with a high-end GPU generally comes out slightly ahead of the Core i9-11900K, in the video (though not always, and it seems to be very close).

Switching gears, there is a lengthy 28-page review (or preview) on Lab501 detailing the Core i7-11700K. This is also an 8-core/16-thread processor with 16MB of L3 cache, but it is clocked at 3.6GHz to 5GHz (single-core turbo). You can think of it as a cheaper, lower clocked version of the Core i9-11900K, and it could end up being a highly popular CPU (depending on where pricing ultimately lands). 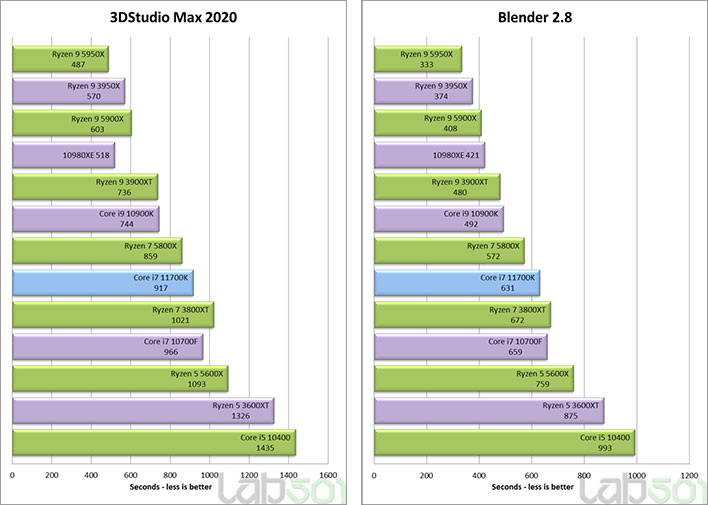 There are quite a few benchmarks in the review/preview, in a variety of different tasks. As it applies to rendering performance, the Core i7-11700K finished the 3DStudio Max 2020 benchmark in 971 seconds, which is tad longer than it took the Ryzen 7 5800X, which completed the run in 859 seconds. In Blender 2.8, the Core i7-11700K finished in 631 seconds, versus 572 seconds for the Ryzen 7 5800X.
The same trend mostly played out in other types of benchmarks, including gaming. From this specific review/preview, it seems the Core i7-11700K performs slightly lower than the Ryzen 7 5800X in most workloads.
Of course, this comes with caveats up the wazoo. It's tough to draw any conclusions from an engineering sample pitted against finalized silicon, as the specs could change. Drivers and optimized platforms make a difference as well. And until we get our hands on the new chips to test ourselves, we caution against reading too much into leaked results.
Nevertheless, if you are looking for Rocket Lake-S numbers to digest as we head into the weekend, then there you go—happy Valentine's Day, our adoring readers.